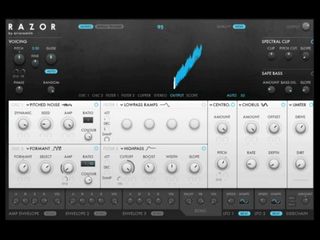 Native Instruments has posted a teaser video for what appears to be a new synth called Razor, which it has created in collaboration with producer Errorsmith.

Offering additive synthesis, "unique" filters and "cutting edge" FX, the wobbly demo indicates that this may be pitched at the dubstep crowd, though it almost goes without saying that it'll be flexible enough to be put to use in a range of genres.

The main thing is that it looks like we're about to get a new NI synth, which is always cause for celebration. We've got nothing against the company's sample-based, guitarist-orientated and DJing products, but Native Instruments made its name in synthesis, and as far as we're concerned, it's what sits at the heart of its business.

The price, release date and specs have still to be confirmed (and we don't yet know whether this will be a fully standalone product or a Reaktor Ensemble yet, either UPDATE: Errorsmith has confirmed that this is a Reaktor-based product), but don't expect to see Razor at the Frankfurt Musikmesse on 6 April as NI no longer exhibits at trade shows.