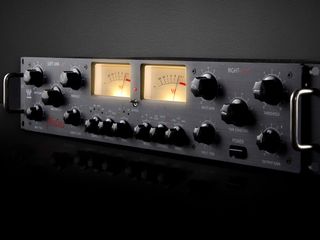 NAMM 2012 PRESS RELEASE: Among audio professionals, the Fairchild 670 is the definitive compressor because of its unique color and character, and it is highly coveted due to its rarity. Now, GRAMMY®-winning producer/engineer/mixer Jack Joseph Puig (John Mayer, U2, Lady Gaga) has again joined forces with Waves Audio (Booth 6242/Hall A), the industry-leading developer of professional audio digital signal processing technologies to introduce the PuigChild® Hardware Compressor.

Modelled on a rare, pristine-condition Fairchild 670 from Puig´s personal collection, the PuigChild captures every distinctive nuance of the original, along with its advanced compression techniques and incomparable sound - achieving every detail of its rich harmonic complexity and functionality.

Jack Joseph Puig stated, “The PuigChild Compressor truly captures the vibe of the original, and as a piece of hardware, it allows us to have the same tactile experience, with the same unique sound. It´s like a dream come true.”

When Waves set out to model the Fairchild, they turned to Puig, who granted Waves exclusive access to his finest unit. Puig worked closely with Waves Research and Development group for over two years, through every phase of the development process, making sure they captured every nuance of its distinctive harmonic complexity and feel of its controls. Manufactured with the same impeccable standards and attention to detail that Waves products are known for, the PuigChild is a remarkable engineering achievement that truly represents the best of the best.

Featuring dual mono, linked and lateral vertical stereo modes, 16/24-bit digital I/O and outstanding AD/DA converters, housed in a rugged 2U, 19-inch rack unit, the PuigChild is a world-class compressor, in the studio or on the road.