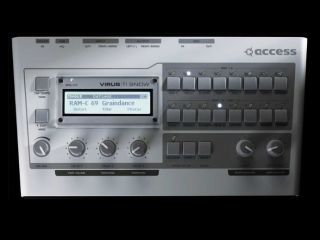 The Virus TI Snow is said to be easy to navigate.

The Access TI Snow won't be the most revolutionary product to launch at NAMM 2008, but it's sure to get plenty of attention from synth fans. An evolution of the other products in the acclaimed TI range - and fully compatible with them - this is being billed as the most affordable Virus ever.

Designed with laptop users in mind, the Snow is compact and portable yet, according to Access, "built like a tank". We're promised easy navigation and quick access to the most important editable parameters.

The Snow is built around the same multi-faceted sound engine as its bigger brothers and sports MIDI I/O, stereo inputs/outputs and a USB port. Like the other TI products, it's designed to integrate seamlessly with your computer: you can use a plug-in version within your host sequencer.

Access hasn't yet released the TI Snow's full specs - details are currently being provided via a teaser trailer on its website - but we suspect that these will be forthcoming once the NAMM show begins.