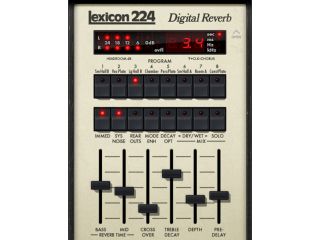 From the moment it was unleashed on the audio industry in 1978, the original Lexicon 224 Digital Reverb - with its tactile, slider-based controller and famously lush reverb tail - almost single-handedly defined the sound of an entire era, and remains one of the most popular and influential digital reverb units of all time.

"The Lexicon 224 has been a significant player on hit records for three decades," said Matt Ward, President of Universal Audio.

"But as with so many great vintage hardware units, original Lexicon 224's are getting harder and harder to find. Luckily, with Lexicon's assistance and our own elite DSP team, we can offer the true, iconic sound of the 224 to anyone making music with a UAD-2 DSP Accelerator on their Mac and PC."

"The 224 was really the product that launched the Lexicon brand," commented Michael MacDonald, Harman Professional Executive Vice President of Marketing and Sales.

"At Lexicon, we continue to push the boundaries of audio processing in new directions, but we entrusted UA to accurately model this classic unit from our past, which is really their forte. We look forward to similar collaborations with UA in the future."

Available for purchase via UA's Online Store in Q2 2011, the Lexicon 224 Digital Reverb plug-in will sell for $349US.

The Lexicon 224 Digital Reverb plug-in will be available as part of the new UAD Software v5.9.0 release, slated for Q2 2011.