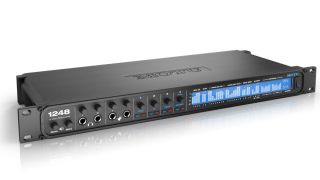 MOTU 1248: The delicate sound of Thunderbolt

MOTU have released three high-end audio interfaces - the 1248, 16A and 8M - the headline features of which are Thunderbolt connectivity (alongside USB) and AVB networking.

In terms of I/O, the top-of-the-range 1248 provides a total of 32 inputs (including four XLR mic ins, two front-mounted hi-Z guitar ins and two 8-channel ADAT optical ports) and 34 outputs; the 16A simplifies things a bit with 16 TRS analogue ins and outs and two 8-channel ADAT opticals; and the 8M hosts eight mic/instrument combo inputs and eight analogue outs, plus the dual ADAT.

All three units include onboard mixing and effects processing (enabling them to be used standalone as well as connected to a computer), the mixer built on on 48 input channels and 12 stereo busses, the effects comprising reverb, EQ, gating and compression.

The mixer, effects and internal settings can be controlled wirelessly or wired (even in standalone mode with a router connected directly to the interface) by a web app on any device capable of running a web browser; and metering is handled by a backlit 324x24 LCD display.

Support for AVB (Audio Video Bridging) means that any two of the new interfaces can be networked over Ethernet cable with up to three more added via MOTU's five-port AVB Switch (£249), and even more worked in using additional standard AVB switches. While a single computer can 'only' record and monitor up to 256 networked channels (128 in each direction) over Thunderbolt, the potential for building ridiculously complex AVB networks involving multiple computers is huge.