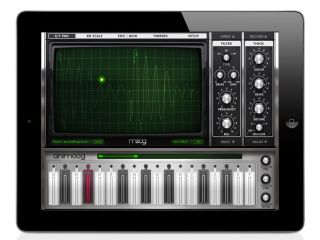 Let's get one thing out of the way right from the start. In this industry, a bit of hyperbole is to be expected - according to the ad men, everything is a revolutionary product. Claiming to be the 'best' is par for the course, and it's hard to argue with such an unquantifiable declaration based on opinion. Your best might be our worst.

However, a claim that something is the first of its kind can be held to scrutiny. Moog has pushed its new Animoog as the "first professional synthesizer designed for the iPad". That's the exact statement copied and pasted directly from the press release and the company's Facebook message sent out only last night.

Really, Moog? Over the past year-and-a-half, we've seen some pretty polished contenders for the same title, including synths from Korg and VirSyn. Well, maybe it could be argued that Korg's iMS-20 was not designed exclusively for the iPad - there are hardware and desktop precedents - and other variants of the hype describe Animoog as the first "polyphonic synthesizer designed for iPad", so in that case, the MS would be out of the race.

However, VirSyn's iSyn Poly and Addictive Synth, Way Out Ware's SynthX and BeepStreet's Sunrizer are all iPad originals. All of these synths (and others besides) have excellent sound and loads of features. So how exactly is Animoog the first?

To make such a claim smacks of the same sort of dubious marketing practices that ARP once employed to shake Moog's position at the top of the hardware synth market. It leaves a bad taste in our mouths and is, frankly, insulting to fellow iOS developers who have worked hard to provide the highest quality products for the platform.

Now that we've said our piece about the hype, let's talk about the synth itself. There has been a good deal of buzz around Animoog since it was released, and most of the comments we've read have been positive, even gushing.

Our own first impressions fit squarely in the former category. This is a good product and an absolute no-brainer at the introductory price of $0.99/£0.69. That price lasts a month and will then shoot up to a whopping $29.99 which, frankly, seems too high when compared to other synths in this particular market.

The concept is not as new as the company might have us believe, but it is intriguing, nevertheless. Vector, wavetable, and morphing synths have played upon similar ideas for decades and Animoog owes something to their design, though Moog has done things a bit differently, thanks in no small part to the iPad's interactive interface.

Essentially, you can stick eight timbres (static or evolving) in the 8x16 grid X/Y pad and move dynamically through those timbres every time you play a note. The motion is represented by animated coloured lines zipping around the grid. The timbres are sampled from various combinations of Moog products, both modern and vintage.

The core quality of those original devices comes through essentially unscathed. Animoog has something of the richness that we associate with the Moog name. No need for hype there. It won't cause the second-hand prices of Model D's to plummet, but it gives iPad owners a taste of the legendary Moog sound, if not the entire experience. Mind you, any decently sampled set of Moog sounds might have done the same.

Sounds are triggered either via MIDI (surprisingly, Animoog responds to polyphonic aftertouch modulation) or with the (oddly Buchla-like) built-in touch-plate controller. As with some other iPad instrument's we've seen, the position of the player's finger on the vertical plane can be used to modulate the timbre. There are pitch and mod sliders and you can choose from one of many available scales.

It goes without saying that Moog has included its filter in the form of a module on the right side of the display. Band-pass, low-pass and high-pass modes are offered. Resonance is in play, as is a drive function, an important component in the famous Moog sound. There are three envelope generators and a single LFO on hand. Though there are relatively few sources available (envelope, LFO, X-position and Y-position), there are plenty of options for sonic manipulation.

The filter module is joined by an Orbit module, wherein the timbre is changed by moving the voice location in the X/Y space. There's also a Path module that enables you to edit the path taken by the X/Y grid. Once you've activated the Edit mode, you can enter and move points along the path. You can sync to the current BPM, alter the rate, choose whether to loop the path, run it back and forth, or play through once, latching the last bit.

Effects are offered in the form of a modelled analogue delay line and a Thick effect that provides bit and sample reduction, overdrive and detuning, along with a unison function.

There is a lot to play with here, and the sound is very good indeed. Is it worthy of being called Moog? Well, that'll depend on who you ask. There are more than a few purists who insist that modern Moog products cannot measure up to their vintage predecessors. We can't see them warming up to an iPad app.

However, Robert Moog was always as concerned with performance as he was with sound, and it played a part in his success. Where other manufacturers eschewed traditional keyboards, Moog's modulars invited musicians to tickle the ivories, and the Minimoog gave 'em the first all-in-one portable keyboard synth. It only follows that Moog would have looked to the performance possibilities of the touch display.

In keeping with that spirit, then yes, this seems an obvious direction for the company to take. We just wish it'd throttle back the hype machine a little and get back to letting the quality of the products speak for themselves.