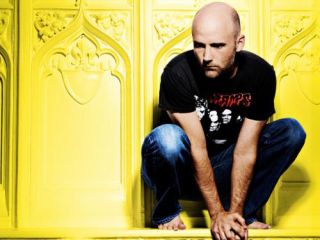 Moby: not keeping you waiting for his new album.

Moby has revealed that he hopes to release Wait For Me, his ninth studio album, on 30 June.

This will be the follow-up to 2008's Last Night and, according to Moby, was recorded at home by himself. It will also feature guest appearances from various friends who the star says are "relatively unknown".

That said, Moby managed to recruit a rather famous name, David Lynch, to create the video for the album's first 'single' - an instrumental called Shot In The Back Of The Head.

Writing on his blog, Moby says: "I sent him [Lynch] the music and said, 'please do whatever you want'. So he sat down and drew some animation that is very dark and beautiful."

In fact, it seems that it was the Twin Peaks director who inspired the whole Wait For Me project: "I started working on the album about a year ago, and the creative impetus behind the record was hearing a David Lynch speech at BAFTA, in the UK," says Moby.

"David was talking about creativity, and to paraphrase, about how creativity in and of itself, and without market pressures, is fine and good."

Moby also provides details of how he recorded the new album, explaining that: "We mixed the record using purely analogue equipment in true stereo, akin to how records were mixed in the late '60s."

You can watch the Shot In The Back Of The Head video below, but first, here's the Wait For Me tracklisting.