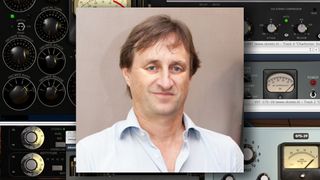 With an impressive array of hardware and software releases under their belt, this Sicilian developer are really starting to make an impression. Here, CEO Quintino Sardo takes a MusicRadar grilling…

"I started from school, with a strong background in maths. I was so lucky to have a good teacher when I was six years old - she used to teach us about alternative numbering systems (binary and also base three, four, etc) using special wooden blocks for numbers!

"When VST and similar technologies were coming out, and desktop computers started to be able to really manage real-time audio, I was experimenting with DSP chips and their development systems. 12 years ago, we started our recording studio in Sicily. I couldn't have developed a feeling of sound quality and good processing tools without that first-hand experience in the studio."

As well as your many plugins, you also create plenty of hardware processors. You seem to get a lot done! How many people are there at SKnote, and what do they do?

"SKnote is a micro company: three owners and three employees, plus some external units who take care of graphics and administration. I'm the 'core' of the design activity, while my two colleagues are more on the musical side of things and also manage the hardware unit, where three more employees help us with assembling physical units. A lot of tooling (PCB printing, case tooling, printing) is done by third parties, but we assemble each unit in-house. Digital code is all done in house."

Your GUIs are very photorealistic. What, if anything, do you think a hardware-style interface adds to the music-making process?

"My rule is extremely simple: I make what I'd like to have. I also think the interface should give an immediate feeling of its purpose when you open its window. If you're mixing in front of a customer, and the graphics tell them something, he knows what to listen for when you move the controls in front of him - I think it is extremely useful. Realistic interfaces also help to keep you in the mood, which is important when you're mixing."

Your RawPro compressors are small and relatively cheap hardware units that fit on a desktop - is this where you think hardware/computer integration is heading?

"Yes. The studio is moving from big facilities to home. A 'lunchbox' is too bulky in a bedroom or in a project studio. The RawPro line is composed of small, lightweight, professional units. You can place them in front of you, plug line channels or microphones straight into them, and have all the controls within arm's reach, on the desk! Or you can spread them on the floor around a drum set… Or go on stage and use them as compressors and DIs! These aren't toys - they're professional tools in a new form factor."

"Our first motorised, full-featured special mixing console, Etna. A great twist on the old way of doing things. Motorised faders and sends, ducking busses, and a small footprint for 32 channels.

"On the software side, we're jumping into the guitar world, with cabinet modelling and more. You'll see a new smart rhythm detector with an automated, interactive rhythm and sounds generator, which should be a great tool for DJs, too. And a few more emulations!"