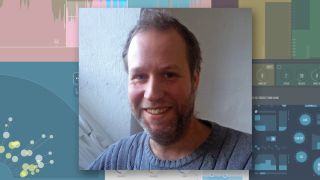 A relative newcomer to the music software development scene, Klevgränd have quickly made their mark with the Enkl synth, Korvpressor compressor, Vandelay multiband delay and various others, available as iOS apps as well as Mac and PC plugins.

We caught up with Head of Development Johan Sundage to find out more about this intriguing Swedish company.

Your interfaces are firmly abstract, rather than aiming to resemble traditional hardware concepts. What's your reasoning behind that?

"One of our primary goals with our products is to provide an interface where the user can be creative and is encouraged to use their ears. Making a software product look like a hardware product isn't always the best way to go, and most of the time it's a pretty boring way to go! The possibilities and characteristics of a flat surface differ quite a lot from those of hardware devices - there are things you can and can't do when using both. I really don't think one can compare them, though. We all love real knobs and faders, by the way!"

You've got a wide array of software, but how do you come up with ideas for new projects? And how do you decide which of those ideas goes on to become a fully developed product?

"It's actually different every time. Most of the time, someone has an idea for a product, then we develop that idea together, and if we still find it interesting, a prototype is made. Then everyone gets the ability to test it, and after another discussion, we decide if we'll go on with the production. And yes, we have a lot of prototypes laying around."

Korvpressor takes an interesting approach to compression, but it offers very few controls. Can you tell us what's actually going on under the hood?

Your software comes in both desktop plugin and iOS versions. How do iOS sales compare to plugin sales, and what do you think this says about iOS as a music-making platform?

"iOS is still a pretty small market when it comes to audio plugins, but it's growing quickly. With stuff like Audio Unit Extensions, Ableton Link and similar frameworks, I guess more and more professional music producers will integrate their surfaces into their workflow."

JS "We're currently working on an iOS app that I unfortunately can't say anything about (except that it's music related!). We're also planning on adding Audio Unit Extensions support to our existing iOS apps during spring, and there are a couple of ideas for new plugins and software synths that I really want to start prototyping."