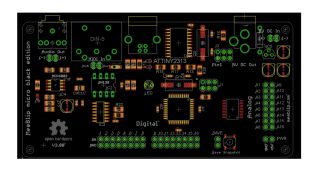 MeeBlip has announced a new version of the MeeBlip micro.

The MeeBlip micro is the hacker-friendly cousin of the MeeBlip SE - a compact and affordable open source digital hardware synth from Create Digital Music and Reflex.

The new MeeBlip micro Black is based around an even more compact board and adds a class-compliant USB port for better compatibility with both computers and iPads.

As with previous MeeBlip micros, the MeeBlip micro Black ships without a case or the onboard knobs and switches of its sibling, allowing it to be fully customised and included in users' own projects. Unlike previous versions, however, the micro Black will ship fully assembled, with no kit option available.

Here's the full info on the new features from its creators:

A compact, surface-mount design. Keeping micro little is a big goal. We've added features without expanding the footprint. As you can see in the image, that has meant squeezing a lot onto the board.

MIDI over USB. You can now connect to a computer without the need for a separate interface. (Class-compliant support means the iPad works, too, via a Camera Connection Kit.)

Easier programmability, over USB. The USB port also works for modifying MeeBlip micro's firmware, so you can hack your micro or use firmware updates from us and other users - no more need for an additional hardware adapter.

Knobbier than ever. 16:1 multiplexing now lets you add more knobs - you can have one for each parameter and still have knobs left over. We have direct switch inputs, too.

No more lost patches. A snapshot save button writes the current patch to memory so that it's saved when you turn off MeeBlip. You can change the default MIDI receive channel with that button, too.