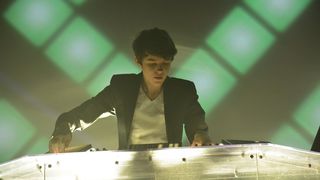 PRODUCTION EXPO 2013: Hugo Pierre Leclercq - aka Madeon - is currently one of the most in-demand producers and remixers in electronic music. When Computer Music scored this interview with the young French prodigy, he was quick to lay down the ground rules...

"Are you gonna ask me about Lady Gaga?" he asked, referring to his collaboration with the multi-platinum pop goddess. In all honesty, we're more interested in FL Studio, Ableton and slicing up samples. "You mean you actually want to talk about the music?" He laughed. "This is fantastic!"

Ground rules established, Leclercq then spent a couple of hours reliving the artistic exploration of his career highlights so far, from winning a Pendulum remix competition in 2010 to remixing Blur, producing Ellie Goulding, and notching up almost 20 million hits for his live YouTube mashup, Pop Culture.

A lot has been written about that Pendulum remix competition. How did you put your remix of The Island together?

"If you want to know about the equipment, I was working on more or less the same setup that I've got today. A Windows PC, FL Studio, a bunch of plugins, an Akai MPK49 keyboard and a set of M-Audio BX8A Deluxe monitors. I'm a huge fan of Pendulum and the production of Rob Swire, so I knew about the competition and I said to myself, 'This is my test!' I was 16 years old, and I wanted to see if I really did have what it takes to make some decent music.

"I spent maybe 50 hours on it, uploaded it to the website and waited. Apparently, another remix was picked as the winner, but Rob listened to everything that had been sent in and liked mine. Unfortunately I wasn't 18, so I'd broken the rules of the competition, but Rob said, 'Fuck it! It's my music and my competition, so this guy is the winner.'

"Suddenly, the remix offers started. Guys were turning up at my parents' door saying, 'We want to sign you.' It was a pretty amazing time, but I had this childlike, naïve attitude to everything that sort of kept me going. I felt that if the music was good enough, everything would be OK."

Listen to Madeon's remix of The Island by Pendulum here:

You've been messing around with DAWs and plugins since you were 11. How come you weren't vegging out and playing Halo like most kids your age?

"I was doing that, too. I wrote a few games, did some programming, but when I first heard Daft Punk something strange happened. With normal rock and pop music, I could understand how it was made. I could look at a guitar and drum kit and say, 'OK, that's how you make a song.' But when I heard the vocoders and space noises on Daft Punk, I became curious. I wanted to know how people made these crazy sounds.

"The first step was getting some basic audio editing software. I had no idea about drum machines or synthesisers, so I made recordings of me hitting my mother's dining table and turned them into drum loops. The recordings are truly awful, but I like them because they represent my first expressions in the world of electronic music.

"After that, I threw myself into music and I tried all the different DAWs I could get hold of: Cubase, Reason, FL Studio… I stayed with FL Studio because it had great demos."

These days, you're something of an FL Studio evangelist...

"That's true. I try to make everyone buy FL Studio, even people who don't make music! I think it's the most fantastic piece of software in the world. Do you know the guy who developed it? Gol [Didier Dambrin] is like this evil genius in a good, weird and creative way. He locked himself away in Belgium and coded most of the FL graphics and plugins.

"The FL synths - things like Harmless and Harmor - are as good as anything else in the marketplace. The audio editing power is mindbogglingly brilliant. I'm not a fan of Windows computers but I use them because of FL Studio.

"FL 11 is even more powerful. One of the songs I've been working on needed 150 tracks of music, so I rang FL up and said, 'Guys, I need more tracks, please.'"

Presumably that level of complexity means tunes can take a while to complete?

"Are you kidding? Some are 150 hours, Some are 200 hours - a long, long time! I use a lot of automation. A lot of tracks are made up of ghost notes. These are notes sent to effects but you don't actually hear the real note. All you hear is the effected note. A kick drum might get split into three separate tracks, with each one processed individually. I might do five different versions of a track and pick every one of those apart two weeks later."

You described the production on Finale as 'The Madeon Wall Of Sound'. Can you tell us more?

"Yeah, there's a lot going on in that track and one of the most important lessons I learned over the last couple of years is that you've only got a limited amount of space for each sound. If you have a complicated song, you have to look for increasingly tiny, intricate spaces in-between the other sounds and make use of them.

"But, at the same time, it's important to look at the overall mix and try to understand which sounds might work together. If you've got strings and pads playing the same chords, you don't really need a whole different space for each sound. They can be processed together.

"There are moments in Finale when there's pad, string, sub bass, distorted bass, guitars, choir and piano all playing at the same time. There's no way to make space for everything, so I sidechain certain instruments - using automation, not compressors - to get them out of the way when they don't need to be there. If the most important part of the piano tune is on the off-beat, that's all people need to hear."

What plugins do you use?

"The ones that really matter to me are the Oxford Dynamics Compressor, which I've used forever, and Guitar Rig. That has been used on so many of my songs that it's a little bit ridiculous! The FL Studio EQ is everywhere and Maximus is one of the easiest mastering tools you'll ever use.

"I used to struggle with mastering and mixing, but one day it suddenly clicked: it's not about skill or having millions of plugins, it's about hearing what's wrong with a track. And I guess that comes with experience. When you first start out, you make a few mistakes and, eventually, you start to hear when a track is going wrong. Fixing it is easy: you EQ a sound, compress it a bit… No magic, no secrets."

You've already mentioned the FL synths. Have you added any third-party instruments?

"I know I keep saying how amazing FL Studio is but that's the truth! Poizone, Harmless, Harmor, Sytrus - they're all excellent synths. But I'm not exclusively FL Studio. I use Komplete 9. I also use Sylenth1, FabFilter Twin and u-he DIVA."

"What's the point? I've never been a big fan of analogue, and if I want an analogue sound, I can get it from a plugin. DIVA is useful for that."

Analogue fans will disagree with you.

"It's OK to have a difference of opinion. Yes, I would say that, in some cases, I can understand the appeal of analogue, but I honestly don't think it's worth the hassle. Personally, I'm not willing to compromise the flexibility and convenience of a digital system.

"And I think this is something that will be discussed more and more as this new generation of producers starts to make music. How can we incorporate analogue into tomorrow's workflow? Will analogue sounds maintain their relevancy or will digital emulation make them irrelevant?"

This feature originally appeared in issue 192 of Computer Music.