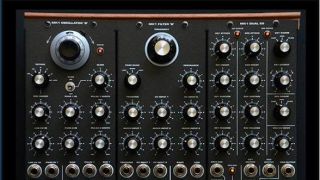 Set to detonate: the MacBeth Bomber

MacBeth Synthesisers have this week announced a new addition to their family of hardware modular synths: the MacBeth Bomber.

Announcing the compact system on Facebook, developer Ken MacBeth described the new model as being "specifically put together to Bomb that Bass!"

Going on, MacBeth ran through some of the specs you can expect from this compact beast. "The single Mk1 Oscillator 'B' gives you 1 x Sawtooth, 2 x Pulse Width (Square) Waveforms, 2 x Sub Octaves, one below the other which all go into the discrete Mk1 Filter 'B' - State Variable Filter that loves Overdrive!"

MacBeth also posted a video demo of his new creation in action, which you can watch below. For more information including pricing, visit Ken MacBeth on Facebook. The developer's official page is macbethstudiosystems.com, though at the time of writing this page doesn't appear to have been updated with news of the Bomber.