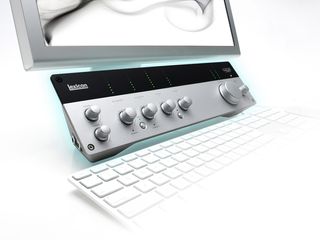 In case you missed them amid all the pre-Christmas hullabaloo, we should point you in the direction of Lexicon's new I·ONIX USB 2.0 audio interfaces. If they sound as good as they look, we could be in for a treat.

Designed to sit between your keyboard and monitor, the new interfaces (there are three) are supportive of 24-bit/96kHz audio.

Input and output levels can be controlled on the hardware using dedicated knobs, while all the analogue inputs feature low-noise mic preamps. Each interface ships with copies of Steinberg Cubase LE4, Toontrack EZdrummer Lite and the Lexicon Pantheon II reverb plug-in.