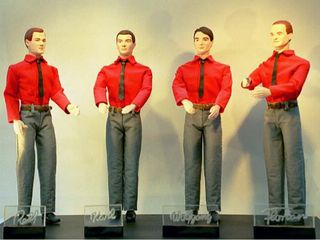 WARNING: Kens were harmed in the making of these men. (Image credit: Dirk Roessler)

A set of Kraftwerk 'action' figures sounds somewhat unlikely - the band are famously static, after all - but that's precisely what German sculptor Dirk Roessler has created.

Via KeepWerking, Roessler says: "I bought some old Mattel Ken figures (that guy from Barbie, you know) at flea markets, 'decapitated' them and sculpted the Kraftwerk heads to apply them onto the bodies.

"First of all I sculpted them and then I built moulds and casted them with resin. Then I realized how hard it is to get some clothes for Ken - even in good toy stores! So I had to sew the red shirts and grey pants on my own - horrible work! Thank God I found some black shoes at the flea market!"

We think the results are pretty impressive, though sadly, you can't buy a set of figures for yourself. This being the case, if you want to have the pleasure of staring at a line of motionless characters, you'll have to stick to watching Kraftwerk in real life.