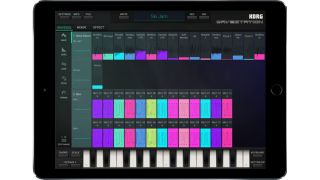 The iWavestation's interface has been optimised for touch control.

Korg's Wavestation synth began life in 1990 as a hardware instrument, later making the jump to PC and Mac as part of the company's Legacy Collection. Now it's back again for iPhone, iPad and iPod touch in the form of the iWavestation.

The synth is based on an "advanced vector synthesis system" that enables you to shift between an array of complex waveforms. You can use a joystick to mix or morph between four oscillators.

In iWavestation, the editing structure from the desktop version has been preserved, but the interface has been redesigned with touch operation in mind. The inclusion of the optional PCM/Program cards means that this mobile version contains 1,500 sounds, and it's interoperable with the orignal Wavestation.

The iWavestation can be purchased now from the Apple App Store for the introductory price of £15/$20.