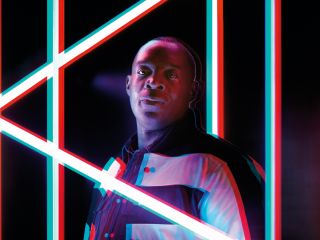 Kevin Saunderson enjoyed huge success under his own name along with a slew of aliases (Reese, KS Experience, E-Dancer et al) before harnessing the vocal talents of Paris Grey with Inner City, whose tracks Big Fun and Good Life were massive worldwide hits. We caught up with him to find out about the birth of the Detroit dance scene and creating those classic tracks of his.

When you started out, did you have any idea that house music would still be going strong 20 years later?
"Not at this level. We were just doing what we loved, and that was it really. We just happened to come along at the right time. We wrote melodic but very hooky tunes, and that plays a big role in our sound."

What setup did you use back in the day?
"When I first started out with a Roland TB-303 Bassline, I had a Fostex 8-track half-inch tape recorder - you had to keep one of the tracks free for the SMPTE code. Working with Paris Grey for Inner City, when I brought her to Detroit to put her vocals to the song, I thought, 'How am I gonna record the vocals?' I didn't have any more room! I wasn't used to using more than eight tracks.

"We had to go to Juan Atkins' studio, as he had a 16-track. That allowed me to record the whole song. The equipment then was totally different… I mean, at that time, it was so cutting-edge. There was stuff like the Yamaha DX100s, the 808, 909 drum machines and a Roland 727 percussion machine. We didn't have plug-ins back then - it was all analogue.

"It was cool though, as it was the start of that era of music technology, so we were miles ahead of some people with what we were doing. For the first time, with your electronic equipment, you didn't need a whole band. You could have a sequencer or a computer and hook everything up with MIDI and let all the devices talk to each other. It was amazing to me, as I wasn't a trained musician, that I could just play a part, manipulate it and make it keep repeating. That was the beginning, you know?"

Did being a DJ prior to making your own music inform the way you made house music?
Absolutely - I think it certainly had a lot to do with the way I started making music. My inspiration was initially still disco from when I lived in New York, so I was into the songs anyway, then Detroit had an influence on me and brought a more experimental, instrumental vibe to my own stuff back in those days.

Being a DJ definitely helped shaped the music and the music scene because there were only so many records that we could play, and before you knew it you were out of records! Adding our own beats then led us into playing music that we could make ourselves, which then expanded our record crates, and that helped lead people to find a more unique sound that became house music. House music in Detroit and Chicago ran almost parallel to each other.

It's fascinating how each city developed its own unique take on house.
"I think hanging around with people like Juan Atkins and Derrick May definitely had something to do with the Detroit sound. Juan was into the theory of technology, and there was also this guy on the radio called The Electrifying Mojo who played music that was really hard to find and that people on the Detroit music scene hadn't previously run into.

"So, we all started digging this really cool music that we hadn't heard before, and that definitely made the music that we then made a lot more unique. There was definitely a Detroit vision, although I was kind of outside of it as I was originally from New York. I grew up with them in Detroit, but I had a little bit of a different take on things when I started to create music."

Making music back in pre-MIDI days can't have been an easy process.
"Yeah - it was very difficult just getting things to run in time! MIDI was around, but the problem was that not every instrument you wanted to use had MIDI yet. After things started being produced with MIDI onboard it definitely made everything much easier, but back then, if you recorded a track or several tracks and later you needed to go back and record some more, you had to use the SMPTE tones to go through a special sync-box in order to lock everything up to the MIDI just to make sure everything was right timing-wise.

"That was a bitch. Or, if you were doing a remix for a company and you had to use their big 24-track tape machine, and you only wanted to use a certain amount of their instrument parts or vocals, we didn't really have samplers that were capable of capturing long sections and flying them back in like you can now. Everything was just much more complicated."

Whereas now, if someone wants a Kevin Saunderson remix, they just email the stems.
"Exactly. You don't even have to see the MIDI parts - you can just lock it right in! People don't realise that without the technology, none of us would be here in the first place. Techno would not have evolved into what it is. When we started doing remixes for bands in the old days, a lot of them were offended because we would take their song and use only a few bits and pieces of it to come up with a whole new track that sounded totally different to their original. A lot of the remixes ended up being hits though, and they helped the careers of those artists, and it was technology that allowed that to happen. You've always got to keep looking forward."

What was your earliest introduction to computers in the music-making process?
"I think it was the Commodore 64, and then I moved onto the Commodore 128. They were really very primitive when you think about it. I'd never really used a sequencer - Derrick May and Juan Atkins both had little 4-track sequencers, but I went straight into the Commodore 64 using software called Dr T's. Yeah, it was interesting back in those days. I think my first computer even had one of the big floppy disk drives!"

Seems like a good point to compare and contrast that with you current studio setup…
"Nowadays it's pretty much Logic, Pro-Tools and Ableton. When I go into a mix I might put things through some outboard gear just to warm it all up, but I'm a Logic guy now. I like to use a little Ableton to get me going quickly, then convert it over later on. Ableton's makes it very quick and easy to get ideas started."

Have you kept all your lovely old gear from back in the day?
"Nope - I've never really held on to any of it. People used to say to me, 'You wanna keep hold of that stuff as it's going to be priceless some day', but you know, I felt that I evolved with technology as that's how I got started, so I didn't feel any need to hold on to things.