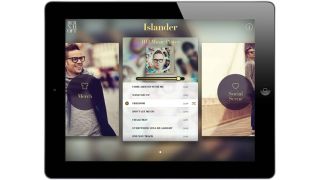 The HD audio tracks in HD360 can only be listened to from within the app.

The demise of the album has been predicted so many times over the past decade that its continued survival almost feels like some kind of administrative mistake. However, it is true to say that, as digital technology has enabled us to curate and stream our music rather than simply buy it in 10-track chunks presented by artists, sales of the traditional long player have been on the slide.

But record companies were never going to allow the lucrative album format to go without a fight. So, over the past few years, they've come up with various attempts to make it more attractive to customers.

One concept that's frequently been explored is that of the 'album app', and the latest platform for this is known as HD360. Compatible with iPad and iPhone, this was launched earlier this year,

The first album to get the HD360 treatment is Bernhoft's rather excellent Islander - a particularly good choice given the artist's predilection for playing his music live using looper pedals. Fire up the Loop Station and you can jam with Wind Me Up, the album's second track, on the fly, with various pads, buttons and switches enabling you to trigger the key elements of the song. You can simply recreate the studio arrangement, come up with your own or - if you get things wrong - make an unholy racket.

Similarly, the Studio presents you with a virtual mixing desk that enables you to adjust the volume, pan and reverb settings for each track of Come Around With Me, Islander's lead single. You can also add your own vocal track. There's some fun to be had here - particularly if the idea of 'getting inside' a professional artist's arrangement and mix interests you - though you may quickly come to realise that your falsetto doesn't sound quite as good to everyone else as it does in your head.

On the video side, there's a 360 clip that enables you to stand amongst Bernhoft and his band in the rehearsal studio and spin the camera round (they're playing Come Around With Me again in case you weren't familiar with it already) plus promos and live performances of some of the album's tracks (including - you guessed it - a couple of Come Around With Me videos). It should be said, though, that some of these can also be found on YouTube.

The package is topped off with some virtual liner notes, links to Bernhoft's social media pages, photos and an invitation to buy some merchandise.

What, though, of that enhanced audio quality? We had a listen through the iPad's built-in headphones output and did a direct comparison with the 160kbp/s MP3s you can hear via a Spotify free account (we didn't have a CD of the album to hand, sadly). There was certainly more clarity to the HD version, with better separation of the various instruments, but this is to be expected. Whether it would really make a significant difference to your enjoyment of the music when you're listening to it through your headphones on the train is open to debate.

Either way, recent history has shown that consumers value convenience far more than they do higher-quality audio. Indeed, most of us now listen to music at lower quality than we did 20 years ago, such is the dominance of compressed formats over the CD. So, the 'HD' element of HD360 might not be a major draw for a lot of people, though we don't doubt that there will also be some who want it.

As we've noted, the interactive elements of HD360 are fun for a while, particularly the Loop Station, but you will exhaust their potential fairly quickly, particularly when you consider that only two of the album's tracks can be messed about with, so to speak. This may be down to storage constraints - the Islander HD360 app weighs in at 1.5GB as it is - but it's certainly an issue.

There's also the question of whether people want all of this stuff together in this format. If you really do crave HD audio, you might be willing to pay the £13.99/$19.99 price tag for an album at that quality, but only if you could have the tracks as individual WAV files. Here, there's no way of getting them out of the app, so listening on any device other than your iPad or iPhone using this particular app is a no no.

This being the case, audiophiles might find that a CD still strikes a better balance between quality and convenience, as it offers a disc of uncompressed music that can be played anywhere and used as a source of MP3s.

If you're a music maker, on the other hand, you'll know that your £13.99/$19.99 could buy you one or more of the excellent iOS music making apps that are available, all of which are far more flexible and open-ended than the interactive elements of HD360. OK, they're a slightly different proposition to what we're looking at here, but the bottom line is that, if you do want to create music on an iOS device, there are countless options, and competition for your pound or dollar is fierce.

That said, HD360 is well put together and does certainly have a deluxe feel. What's more, if you've never used any music software in the past, its interactive features will be a real eye-opener. It's just that, in the context of the rest of the app market - and this is an app rather than an album, let's not forget - they feel somewhat limited.