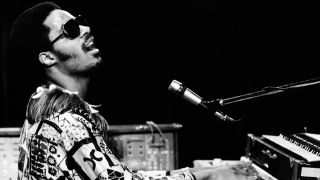 It would be wrong to say that Stevie Wonder is underrated - in fact, he’s one of the most celebrated artists in popular music history - but it’s also easy to forget just what a career he’s had.

So, as Stevie turns 70 - Happy Birthday, sir - allow us to remind you why he’s Wonder by name, and a wonderful talent by nature...

Few artists - if any - have released such a high-quality run of albums as Stevie did in the 1970s. Music Of My Mind, Talking Book, Innervisions, Fulfillingness' First Finale and Songs In The Key Of Life kept the bar remarkably high, but not only were these records popular, they were also groundbreaking.

With Robert Margouleff and Malcolm Cecil (AKA Tonto's Expanding Head Band), Wonder pioneered the use of synthesizers in mainstream music, simultaneously redefining what soul/R&B music could sound like. His interest in technology has never waned: he's still a regular visitor to the Winter NAMM Show, where he likes to test the very latest gear.

Here's the fabulous Boogie On Reggae Woman, from 1974's Fulfillingness' First Finale, which features one of the finest synth basslines ever recorded.

2. He took control of his career

When Stevie's original contract with Motown expired on his 21st birthday, rather than simply sign a new one, he took the royalties that had been held in trust for him and built his own recording studio. He then renegotiated his deal with Motown, ending up with an agreement that entitled him to a greater share of royalties and full artistic control. He also set up his own publishing company.

All of which proves that, as well as being a genius musician, Wonder also knows how to get what he wants.

1971's Never Dreamed You'd Leave In Summer was one of the first songs that Wonder both co-wrote and produced.

3. He can play more instruments than you

Some of us are proficient on one instrument, while others might be able to hold their own on one or two more, but Stevie's playing skills are extraordinarily wide-ranging.

As well as being a master of various keyboard instruments - notably the piano (acoustic and electric) and Clavinet - he can also play the drums, bass guitar, congas, bongos and, famously, the chromatic harmonica. Oh, and he's a very capable producer, too.

Check out his drumming on this re-recording of I Wish.

Like many artists, Stevie has, on occasion, blotted his copybook. Despite being a big hit, I Just Called To Say I Love You is an unmitigated piece of schmaltz, and though the sentiments that motivated Ebony and Ivory, his duet with Paul McCartney, were honourable, the record itself has a certain naffness.

Despite these inauspicious moments, though, Stevie's place in musical history is assured. His good stuff massively outweighs the bad.

5. He brought the funk to Sesame Street

Plenty of artists have been invited to appear with Bert, Ernie, Big Bird and co, but surely few have given such a kick-ass performance as Stevie did when he turned up in April 1973.

This is as tight a rendition of Superstition as you're ever likely to hear. Make sure you check out the kid who gets lost in the music at 4:10 - we know how he feels.