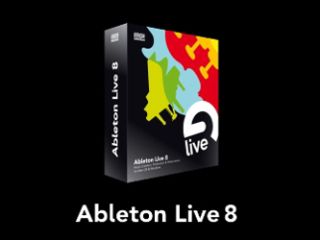 Ableton Live 8 is expected in the spring

The most significant of these, of course, was Live 8: the latest update to Ableton's DAW and the first since Live 7 was released in November 2007.

Six weeks later, and with the new version slated for release some time in the second quarter, Ableton is busily beta-testing its new baby - with the help of the eager Live community and (after getting our hands on a beta version) MusicRadar.

Live 8 promises a plethora of new features - some of which look very tasty indeed - so here, then, are our first impressions of the best of the new stuff.

This one's a biggie. The new warping engine enables you to create warp markers assigned to a specific point in an audio file, meaning you can warp within a single clip by dragging the markers forward or backward. Warping is aided by Live 8's new transient analysis, which scoots through each clip and identifies transients automatically - you can then get warp markers to snap to the nearest transient without having to zoom right in and do it manually. Ideal for plenty of applications, but we found it particularly useful for getting vocal samples in time.

Live 8's groove engine lets you assign preset grooves (you can make your own, too) to both MIDI and audio clips. A groove can be applied subtly or rigidly, and you can randomise, adjust velocity and more. We haven't yet pushed the groove engine to its limits, but we got some decent results from applying a drum groove to a synth bassline to get a super-tight lock-in. It's undoubtedly a powerful tool, and while the number of controls makes it seem slightly fiddly by Ableton standards, it's a fair trade-off for the amount of control over the groove you're offered.

At last, the new version of Live will offer audio crossfade functionality - an essential feature if you want to do more 'traditional' audio editing. It's been implemented well here - crossfades have multiple 'handles' (see the red lines above) which offer huge flexibility without over-complicating things.

A small, simple addition but a very welcome one. Thanks to Overdrive's Bandpass display, a surprising range of sounds can be coaxed from this little device, and in combination with the dry/wet control (not something you usually find on an overdrive unit), it works wonders for beefing up drum parts.

MusicRadar's favourite addition is probably Live 8's new three-band compressor/expander, dubbed Multiband Dynamics. True to its usual ethic, Ableton has made the device surprisingly simple to use (a plus for what is usually seen as a fairly complicated processor), and after just a couple of minutes our mix was pumping twice as hard. Multiband Dynamics really comes into its own at the bass end of the spectrum - believe us, once you try it on a drum sound, you won't go back…

Live 8 has a revamped MIDI editor, with the most significant feature being a step record mode. With the 'insert marker' in position, arrow key input moves the marker to the next beat division, recording any keys you're playing in the process at each step. We found it a quicker alternative to simply clicking notes in for parts with even note length, such as arpeggiated synths and busy drum parts.

Grouping tracks is obviously useful for mixing - but we found the best use of the new feature was to launch groups of clips at the same time. Very handy if you're playing live.

Live 8 lets you zoom the interface in or out via the Preferences pane, and it's a more useful feature than you might think, especially if you're playing live and you need nice, big, hittable buttons.

The left-hand-side browser now has a small preview window showing the waveform of selected audio clips (which you can scrub through), and, more usefully, you're given a Raw button which plays the clip unwarped and unlooped.

It's now not only clips that can be coloured any ghastly hue you can dream up - Live 8 lets you colour tracks, Scenes and macros, too. Again, very handy for live use.

This one's simply a brick wall limiter. Have we mentioned live use yet? The Limiter is perfect for slapping on your master output to ensure the sound guy doesn't have a heart attack should anything go awry.

We think the new Looper is probably going to be one of Live 8's biggest selling points. Sure, it has limited uses, but if the number of manufacturers now offering looping pedals is anything to go by, interest in them is at an all-time high.

Live 8's Looper device can sync your entire project's tempo to the length of the loop you record - meaning you don't need ninja-accurate feet on the MIDI footswitch to get everything in time. Looper is flexible too: it can tell the song to start or stop, and Ableton has thrown in a reverse mode for good measure.

Being the dance production staple that it is, we're surprised Live hasn't featured a vocoder sooner, but still, better late than never. The Vocoder device has everything you'd expect - classic sounds and plenty of routing possibilities - but with a couple of extra features too: the 'unvoiced' knob adds extra bite to consonant sounds (giving your robot singers perfect diction) and the 'noise' modulation source comes with an X/Y pad for shifting the white noise's tone. Self-modulation sounds pretty cool, too.

This is a fairly standard frequency shift and ring modulation effect. As we hoped, every sound from subtle shifts to crazy Dalek noises is possible.

Third-party plug-ins in Live have long been accompanied by an assignable X/Y pad, but you were limited to just two parameters to play with. The new Configure button enables you to select extra parameters and assign them to faders on the plug-in's device front. Very useful if, for example, you're using a synth plug-in with 101-odd knobs.

Of course, that's not all Live 8 has to offer - among numerous small fixes, Live's FM/analogue synth Operator has been completely overhauled, and there's also a completely new instrument in the form of Collision, a virtual mallet instrument. All will be scrutinised in our upcoming full review.

What can we learn from the beta, though? Well, Live 8 looks like it's shaping up very nicely indeed. When Pro Tools and Logic updated to version 8, both DAWs seemed to take a step towards each other - and this is no bad thing - but it's nice to see that Ableton, with its number 8, has carried on walking its own path.

Check back soon for the full review.