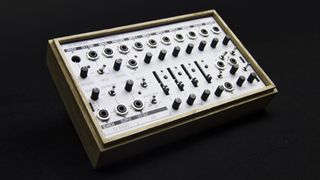 Koma Elektronik has developed a brand new electroacoustic workstation called the Field Kit, which is designed to process signals from microphones, contact microphones and electromagnetic pickups, and is able to run DC motors and solenoids.

Not only that, but the Field Kit can also receive radio signals and convert signals from switches and sensors into control voltages.

The Four Channel Mixer is the beating heart of the Field Kit, providing a fully functional mixer with individual Gain, Mix Level and Tone control over each channel and individual Master and Aux sub-mixes.

The CV Radio is a CV-controllable radio receiver capable of receiving radio frequencies on AM/FM and SW bands. Additionally, it provides the ability to catch electromagnetic waves for further processing inside the Field Kit. The frequency of the radio can be set with a dedicated multifunctional Search control which acts both as a manual CV source and as an input attenuator for a CV signal.

The Envelope Follower in the Field Kit applies two functions to the waveform you send to the input: full-wave rectification (mirroring of negative portions of the waveform) and low-pass filtering (averaging). It can also be used for frequency doubling of a signal, which is a great tool to have in the electroacoustic domain.

The Low Frequency Oscillator generates periodically varying voltages to be used as control signals. The output waveform can be set with a three-position Waveform control and gives out either a Square-, Triangle- or a mix of Square and Triangle waveforms.

Not content with just producing the Field Kit, Koma Elektronik has also got some extras up for grabs.

There are plenty of smaller products on offer, including T-shirts and mixtapes, plus you'll be able to swap the front panel for a 36HP Eurorack-friendly version, should you want to add it to your system.

Aside from all that, there's also an Expansion Pack, which includes a whole bunch toys for you to plug into your Field Kit.

If you want to get all up in the Musique Concrète way of life, then the German manufacturer invites you to back the Field Kit on Kickstarter with super early-bird prices starting at €199 and DIY kits set at €159.

For more information, check out the Kickstarter page and Koma Elektronik website.