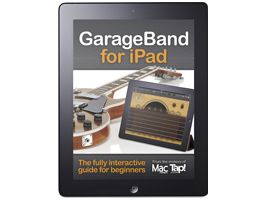 Get more out of GarageBand for iOS.

Our colleagues at Tap! and MacFormat magazines have sent word of a new tutorial guide they've released for the iPad via Apple's iBooks 2 platform.

Called GarageBand for iPad, this shows you how to master the features in the iOS version of Apple's acclaimed entry-level music making software, and comes with step-by-step walkthroughs on all the major parts of the app.

Among the topics covered are virtual instruments, recording a song, plugging in and using real instruments, editing and tweaking a song and sharing it with the world. There's a video for every step, so you'll be able to see exactly how to use the app to its full potential.

GarageBand for iPad is available now via the iTunes Store. The full price is £2.99, though it's currently available for £0.99.