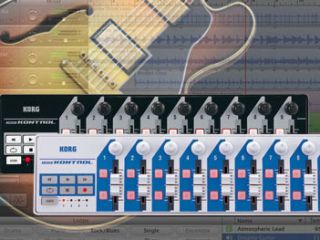 Using the nanoKontrol with GarageBand just got a little easier.

What's this, a virtual version of Korg's nanoKontrol? Not quite, but the new free nanoKontrol Control Surface plug-in does promises to make it easier for GarageBand and Logic users to integrate this micro-mixing device into their setups.

Developed in response to requests from users, the new plug-in promises to "dramatically improve" nanoKontrol performance within GarageBand and Logic.

"By using the nanoKontrol Control Surface plug-in for GarageBand/Logic, installation is done as recommended by Apple and nanoKontrol works with Logic Pro without complicated settings."

Put simply, the plug-in makes configuring the nanoKontrol much easier when used with GarageBand and Logic. Controls supported include the transport, volume/pan/mute/solo for each channel, EQ and effect send. Users can also control beyond the ninth channel.

The plug-in can be downloaded from the Korg UK website.