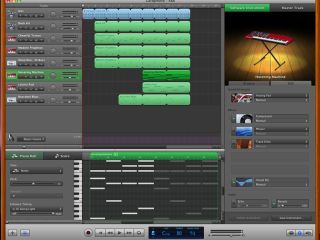 As of yesterday, Apple's iLife '09 software suite was available to buy, which means that you can now get your hands on the latest version of GarageBand.

To mark the occasion, MusicRadar was invited along to a press briefing at Apple's London headquarters, and we came away with a copy of the new software. So, what are our first impressions?

One thing to point out from the outset is that you'll need OS X 10.5 (Leopard) if you want to run GarageBand '09. In fact, that goes for all the other applications in the bundle, too (iPhoto, iMovie and iWeb).

We should mention here that Apple is currently offering Leopard, iLife '09 and iWork '09 in a £149/$169 bundle, but there's no discount available if you just want to buy the former two products.

While we're on the subject of system requirements, it should also be made clear that if you want to use GarageBand's new Learn to Play features - you can find out what we make to these in a separate article - you'll need to be running an Intel-based Mac with a dual-core processor. As far as Apple is concerned, non guitar- or keyboard-playing PowerPC users will have to remain so.

Fire up GarageBand '09 and you're greeted with a new splash screen that lets you select the type of project that you're going to be working on. Essentially, this is a selection of templates; it's a potential time-saver and handy for new users in particular, but we'd like to see the option to create your own, too.

Get into the main application and it quickly becomes apparent that the GarageBand interface has been treated to a bit of spit and polish. In fact, with its grey background, it now bears more than a passing to resemblance to the two products in the Logic range.

However, while tasteful graphical tweaks have been made throughout - and the Loop Browser has been moved from the bottom of the screen to the right - it has to be said that, as we suspected when GarageBand '09 was announced, there's not a great deal new here for producers to get excited about.

The guitar's the star

Before you go thinking that the only changes are cosmetic, though, let's move onto the new guitar amps and stompboxes (five of the former; ten of the latter). Apple tells us that these are powered by the modelling technology found in Logic, and initial impressions are pretty favourable.

Now, when you add a new track, you're given the option of choosing a guitar-specific option.

From here, you can pick from a healthy selection of presets or select any combination of amp and stompboxes that you like (up to five effects can be used in a preset). These are all editable, too.

Take a listen to some of the guitar presets in action (rhythm part preset/lead part preset):

The Magic GarageBand feature that made its debut in the previous version of the software has also been enhanced. There's now a mixer, an Arrangement Track, the option to randomly select instruments and a built-in recording facility.

This remains very much a hobbyist tool, though, and isn't going to be used by anyone who's remotely serious about recording their own music.

New users, though, will find GarageBand '09 to be a superb entry-point into the world of computer-based music production. It remains insanely easy to use, and it now looks a bit nicer too.