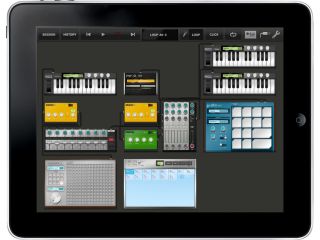 What has Retronyms brought to the table?

There's no shortage of end-to-end iPad music production apps but the door is still open for someone to come in and lead the market. GarageBand for iPad is a great option for the guitarist/keyboard player, but if you're of a more electronic bent, there are reasons to look elsewhere.

Enter Tabletop: a 'modular audio environment' from Retronyms, which previously developed the iOS version of ReBirth for Propellerhead Software. The premise is that you're given a selection of devices that you can bring to your virtual table, and these can be hooked together using patch cables to create your studio.

Tabletop is currently available for £2.99 - this price includes nine devices, while others are available as in-app purchases.

What's on the table?

The supplied tools include the Gridlok touchpad sampler (into which you can record directly), the RS3 polyphonic keyboard, the M8RX tone matrix (think Tenori-on style music making), the Spinback turntable player (complete with iTunes library integration), the Goblin MX8 8-channel mixer, the T101 - Triggerator sequencer, the Recorder M2 (for recording elements of your session or the entire mix), the Filtr LP low-pass filter effect, and the Mr O master output box.

Getting this lot to play together is pretty easy: just select them from the Devices menu and wire them in as desired. It should be noted that there's no Reason-style auto patching - the cables always have to be plugged in manually, which might cause a little confusion if you're not familiar with working this way. There are several templates, though, and you can also tweak the demo songs.

Patterns can be stitched together into projects using the block-based T-101 Triggerator sequencer, which is pretty logical and also enables you to trigger patterns by tapping them.

One thing that's likely to divide opinion is Tabletop's sound library, which veers towards the outré. Don't expect 'traditional' sounds from the sampler or keyboard - they're definitely geared towards the open-minded electronic music producer. This is admirable in a way, though the enigmatic preset naming means that you often just have to dive in and experiment.

It's also worth saying that the RS3 keyboard feels decidedly limited at this stage. Its range is restricted to two octaves (there are no up/down buttons on the fixed-size keyboard) and editing comprises just ADSR controls. There's no MIDI editing of recorded parts, either (though there is quantize) and CoreMIDI isn't currently supported.

Arguably Tabletop's biggest problem, however, is that several of the devices that are sold as extras feel like compulsory purchases, which isn't going to endear the app to users who want to pay their money, power up and go. You'll have to pay £6.99 (more than the app itself, currently) for a mixer with sends/returns and solo buttons, for example, and the delay, band-pass filter, chorus/flanger and reverb effects are all £0.69 each. This is less than they were at launch, but it's still an additional cost that has to be factored in. As yet, there's no sign of compression or EQ devices.

Had it got legs?

The concept behind Tabletop is sound, but right now, it feels like this is running slightly ahead of the execution. Yes, it's relatively cheap, but if you do buy it, you'll have to have faith that its potential can be fulfilled in the future. Retronyms has said that it would like third parties to develop for the platform, but it remains to be seen whether or not this will happen.

Once Tabletop is refined and more devices become available, it could turn into a serious contender. It looks great and is certainly creative, but as things stand, it feels more like one to keep an eye on than a must buy.