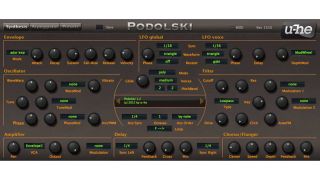 u-he Podolski: it's free, so why wouldn't you?

Following yesterday's free NI distortion/filter plug-in Driver we have news of another giveaway today in the form of u-he's Podolski mini synthesizer.

This refurbished instrument (it was originally given away as a covermount on a German magazine in 2005) is basically a cutdown version of u-he's FilterscapeVA and comes with one oscillator, one filter, one envelope and a couple of LFOs.]

There's also an arpeggiator/sequencer that's similar to the one in u-he's Zebra synth plus chorus and delay effects.

Other features include the Click parameter, which emphasises the filter attack, and the ability to warp between three waveforms via the WaveWarp option.