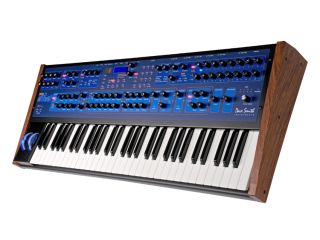 Prophet-style knobs are now a feature of the Poly Evolver.

PRESS RELEASE: Dave Smith Instruments has released an updated version of its flagship synthesizer keyboard, the Poly Evolver. The new version boasts 60 potentiometers among its complement of 78 rotary controls.

"The response to the pot edition of the Prophet '08 has been overwhelmingly positive," said company founder Dave Smith, "so we decided to extend that functionality to the Poly Evolver, as well." Unlike endless rotary encoders, potentiometers allow the full range of a knob's values to be accessed in a single turn of about 300 degrees. That simplifies filter sweeps and other more performance-oriented gestures. A kit with potentiometer-equipped panel boards is available to convert older Poly Evolvers.

There have also been some cosmetic changes. "We needed both lined and unlined knobs to distinguish between the pots and encoders, so we're using Prophet-style knobs," said DSI's Andrew McGowan. "And we've updated the panel graphics a bit without changing them significantly." The wood end panels are now made from bubinga.

First released in 2005, the Poly Evolver received multiple awards and has been used extensively by artists such as Nine Inch Nails, The Faint, Silversun Pickups, Van She, and Thursday. An analog/digital hybrid, the four-voice Poly Evolver features four oscillators—two analog and two digital—in a unique stereo voice architecture with a real Curtis analog low-pass filter per channel on each voice.

The digital processing does not simply add effects at the end of the signal chain, but is tightly integrated with the analog electronics for tuned feedback, distortion, bit crushing, and synced delays. It can also process external audio and has separate stereo outputs for each voice.

The updated Poly Evolver Keyboard is available now with an MSRP of $2,899.00 and an MAP of $2,599.00. The conversion kit requires nothing more than a screwdriver for installation and is available directly from DSI for $399.00 or factory installed for $449.00.