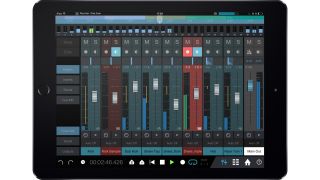 You can now take Remote control of Studio One.

In common with the likes of Apple and Steinberg, PreSonus has released an iPad controller app for its DAW. Studio One Remote is designed as a "second screen" wireless control surface for Studio One Professional, and is available now for free.

The app enables you to control the transport and mix console, track Macro Controls, custom commands, and built-in and third-party VST and AU plugins. The only stipulation is that the Mac or PC running Studio One has to be on the same network as the iPad controlling it.

In fact, you can have several iPads running Studio One Remote and controlling the same version of Studio One, which could be useful when you're collaborating.

A feature list is below, and you can download Studio One Remote now from the Apple App Store. It's compatible with Studio One Professional 3.0.1 (which has also just been made available) or later.