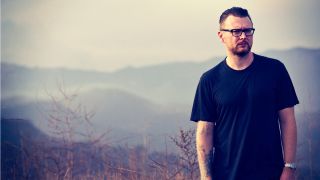 With his own project, Conjure One, Fulber elevates his style to encompass downtempo pop melodies with rhythmic dance beats and lush orchestration. A highly experienced producer and musician, there's little Fulber does not know about working inside the box or out of it.

How did you want the new album Holoscenic to evolve from previous releases?

"This is a more personal record, the songs are about things - even the instrumentals are about something, before they were just composed rather than defined themes. I started reviewing the material and thinking objectively about adding tracks in major keys; I wanted to make sure there was a variety of textures.

"Also, I'm mixing everything myself now, except for a couple of songs. I find that the more time you spend on a song the more likely you are to hit that perspective loss and need another set of ears. But I don't do mastering, that's still something I feel is a black art and very specialised."

If someone can mix an album, why can't they master it?

"You hear things differently when it's other people's work. Sometimes I don't hear certain details until way later - it's right in front of you, but you don't see it. I've been to a top mastering studio in NY with Ted Jensen of Stirling Sound and literally had no clue what he's doing, but whatever he's doing it's making a difference, and when you watch one of the best you realise it's not easy.

"What he's doing is very subtle, there's no slamming brick wall limiting. It's alchemy but I can't hear well enough, my ears are damaged from growing up in rock and roll."

What's sitting at the core of your studio these days?

It's based around Pro Tools and Abelton Live. I do most of my writing in Abelton, develop the song to a certain point and move it over to Pro Tools. I find Pro Tools is a better environment for mixing and finishing, whereas Ableton is great for getting something 75% there. I just like the way Pro Tools handles audio and mixing."

Are you running everything on a PC?

"My basic studio hasn't changed much in the last eight years. I have a Mac Pro and update that every few years and now use HD Native. I mostly use analogue synthesizers and try not to use a lot of plugins.

"The first song on the album, Kill The Fear, was all software because I did a lot of it on my laptop and ported it over. I tried replacing some of the sounds with analogue synths but the energy wasn't the same. Overall, the record has a hardware-based sound."

What software synths do you generally use?

"Mostly Massive, because I think it sounds pretty good, although there's something about soft synths I struggle with. To me they don't sound like anything - if that makes any sense? The reason I love analogue synths is that they're imperfect, which gives the music a character and musicality that's missing from software. They sound like a musical instrument.

"If you play a guitar, not every note is perfectly in tune, it's impossible - and that sounds more like music to me, but then I love modular synthesizers and crafting each sound. I think that's one of the joys of electronic music that's being swept away, with people in a hurry to make tracks and use a lot of presets."

You use a lot of string sounds, what tips would you give to people to make soft synths orchestral-sounding?

"On Ghost, Still Holding On and Under The Gun there are real strings, and you can't beat real strings. You can get close, but it's just not the same. If you have to do it electronically, there's something I learned from Chris Elliott who's a top UK string arranger - just put the parts together separately. Do your cello, violin, and viola sounds separately, compose them properly and compartmentalise each section, don't just use pads."

Is using modular gear a more recent thing for you and what hardware synths have you been using?

"Well I've had a Eurorack system since 1997 and have always used it. I have a pretty decent-sized system. A lot of my modules are original Doepfer modules, and I've added some new ones. I have a little Serge modular panel that I use occasionally, which I can patch into the Eurorack.

"The synth I probably use the most is the Studio Electronics Omega 8, that's my go-to analogue polyphonic synth. It does everything; it's got different filter boards and comes with the Moog-ladder and Oberheim filters. I also added ARP 2600 and CS80 filters for it.

"If you want anything analogue you can pretty much get it out of the Omega; it's very musical and fits into tracks really well. You can stack all the voices in unison and get huge detuned sawtooth sounds. It sounds like it costs [laugh]."

Does it irritate you that you can't save anything you stumble on using modular?

"I don't save patches anyway. I mean on the Omega I do, but not in general. I don't save sounds I just record them. I use the Omega 8, the JoMox SunSyn, which is a real bizarre machine that I love, and a Waldorf Q Plus, but even though they all have patch memory, I usually just make a sound, record it and do something else the next day.

"Once I get to where I want, I'll record it to Pro Tools or do multiple takes and tweak the sound a little differently."

So a more spontaneous way of working?

"I treat it very much like I'm recording guitars, and I do double tracks a lot, which sound great. If you double-track a plugin it doesn't sound like anything. With analogue you just record two patches, because the way the oscillators play each note it's always slightly different - that's what I mean about the imperfections.

"I can record a track using the Omega 8 and use the same MIDI part on another track and it sounds a little different and also gives it a bigger sound."

What outboard gear are you using?

"I have some Chandler preamps that I love. I think they make a big difference, even using them as a DI for synthesizers - it's something to do with the way they balance the signal. When you plug stuff directly into an audio interface, it doesn't sound as good as when you put it through a proper microphone preamp.

"When every stage has been recorded really well, it starts stacking up nicely and you get a body to the sound. When I record vocals I'll use either the Chandler or a Purple Audio compressor - an 1176, an SSL stereo EQ and an Alan Smart Mix Bus compressor, which just adds a little extra something to the mix bus.

"The Waves plugin version just doesn't have the same mojo or as many functions. Oh, and I have a Lexicon 300 reverb; it's from 1994 but still sounds better than most of the plugins."

Do you feel that you are you still evolving as a producer?

"Oh yeah, I can do way more stuff than I could 10 years ago. I used to make a lot of records in commercial studios with an engineer, but now I do everything myself. I have a full studio where I can track a full band if necessary.

"I don't enjoy editing sometimes, but it's got to be done. Over the years you learn more and more, so other than the mastering I can pretty much cover it all. I think you have to always be learning, if you're not then something's not right.

"A lot of new people in electronic music don't know anything other than their laptop, and the way people using compression is shocking - they just slam everything; it's a straight line and all white noise. When I'm mixing in Pro Tools and everything's blasting, I'll pull the master bus down 5dB and the whole mix just opens up. Louder is not better, if you want it louder, turn it up."

Would using a mixing desk make much of a percentage difference to you?

"Honestly, I don't think so. Some years ago we were mixing a Delerium album in Pro Tools and Bill Leeb didn't think it sounded as good as it should, so we remixed the whole album on an SSL desk and the difference was marginal.

"If you're doing Rock or music with a lot of guitars, I think consoles make a difference, because they give you a little extra sonic real estate that's helpful for instruments that take up a lot of space. But if you make electronic music and are recording everything well, through proper gear, the summing isn't as big a deal."

Are you still doing a lot of production for other bands? What do you currently have lined up?

Absolutely. I guess you could say production's my day job and Conjure One's my personal art. I do more mixing and like to be busy. I've done all kinds of stuff; if you look at my repertoire you'd think it's a typo [laughs].

"I'm also making a new Delerium album with Bill, but it's not quite finished yet. There are some newer flavours in there, maybe some modern EDM elements, but it's still downtempo and ethereal so people won't be disappointed."

The new Conjure One album 'Holoscenic' is out now on Armada. For more information, check out Rhys's Facebook, Twitter, and SoundCloud pages.