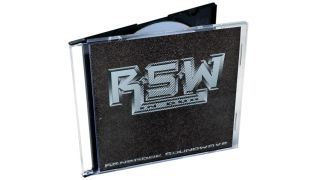 After the masterpiece of genre-splicing breaks, samples, and electronica that was their debut album, Soundclash, dance music pioneers Renegade Soundwave followed it up with a stripped back dub version. They may have lost the vocals, but the trio of Gary Asquith, Danny Briottet and Carl Bonnie certainly added some extra bite with their trailblazing work in the studio on, what is arguably their finest work, In Dub.

"We pretty much lived in the studio working on that album," says RSW's Danny Briottet. "They had a nice Amek desk with some automation, which made things easier. We recorded everything to 24-track on two-inch tape. All the tracks would be full and hardware would be all over the room, connected together with dodgy leads. It was like a big train of gear, but we made it work."

The Soundclash material splintered off into bold new directions. Fresh material was added to the mix and ideas rejected previously were pushed to the front of the queue, their space and barrenness now a virtue for dubbed out path finding, just like their favourite Reggae producers of old might have done.

"We did In Dub partly because of our love of dub reggae," says Briottet. "I grew up with it. You'd buy a Dennis Brown album or something, and a couple of months later they'd put a dub version of it out, so it was a natural thing to do for us, from our point of view. Dub is just so free. We were in that studio constantly and just poured it all out, you know? We just didn't stop. We just got our teeth into it. It was a very creative period of time."

Danny Briottet takes us through In Dub, track by track.

"The bass is from Cocaine Sex, a track we did in 1987, sped up. I used to DJ it out on 45rpm and it really tightened up the bass, so I wanted to put it in a track. Gary [Asquith] was the one who brought in that Impossible sample [Perry Como - It's Impossible]. I dunno how we got away with it. It was a 16-bar sample. He came in with it one day as we had the rhythm going for Thunder, and he put it on and it just fitted.

"When we went out live, I would trigger samples with drum pads. I had a mixing desk and loads of loops and samples, and some Roland drum pads. I'd bring in various bits by hitting the sticks and bringing in one-shots. That Impossible sample was a nightmare. If you were a 16th out you'd have these 16 bars of bollocks going off [laughs]."

"There were some tracks that some of us had more to do with than others. For example, Carl [Bonnie] pretty much did this one. I listened to it recently for the first time in a while, and it still stands up. It must have been something he really wanted to do, and we ended up with a really good track. It was all about the freedom of expression between us, and musically, dub is a very free way of working as well.

"I used to like to DJ tracks like this out to road test them. You'd hear your tunes at a rave or [Notting Hill] Carnival. I used to watch people to see how they responded to different bits of the tracks. If it seemed like it was flagging here and there, we'd have to think how we could improve it. It was a good way of working."

"This was done down at another place, away from the Mute label studios, called Jacobs Studio, actually. It was this spot down in the countryside, over in Surrey.

"I think another band on Mute - maybe Inspiral Carpets - were doing an album down there, and they had to cancel a load of days, so we had the chance to have a long weekend in the country making music. We went down there with a load of different bods and ended up having a mental few days smoking loads of weed and drinking loads of booze, and did a couple of tracks, including Deadly. We did it in one session, and then mixed it back at the Mute studios. It still sounds good to me. Again, it's got some ridiculous samples in there that you'd never get away with now."

"This was another version of Cocaine Sex from the Soundclash album. We stripped that song so many different ways [laughs]. This was one of Carl's takes at it.

"The drums are good on this. I did the original ones on Cocaine Sex. We had an Akai ME3ST, which we used as an audio trigger. I've still got that, and can see it in my studio now. What we'd do back then is set a live drum kit up and put the mics around it, then go through that, then that would record it to MIDI. That was quite a cumbersome process, though, to be honest. Both Carl and I started out as drummers, so we'd play as much as we could and use these new sounds. We had percussion set up as well. We generally had loads of stuff to smash and bang and break to get sounds."

"Another version of a Soundclash track. Gary pretty much did Pocket Porn on his own on the original album. To my mind, it's one of the best songs he ever wrote. When it came to making In Dub, we knew that this would be a great track to stretch out. Lyrically, it was really good, but musically it was very interesting. It has some Indian bits and various other sounds that really stood out. It's got samples from a Turkish record on there too, and an answering machine message from a Maltese pimp that we knew… We'd sample anything and everything. It took time, though. We'd spend ages digging around vinyl bins, hoping there would be some bits of gold that stood out from all the crap.

"The title is still great. It was an observation I'd made watching women dancing to our tune, The Phantom. You'd hear it everywhere, and when the bass kicked in all the women would get up. It's all to do with chakras and how low-end frequencies effect the woman, and the woman's womb.

"Women Respond To Bass has a spiritual vibe to it. You have to remember the drugs that were around at the time. We never really made anything with that in mind, but the whole In Dub album, and especially tracks like this, soundtracked a lot of people's lives. It was something that people would play when they came home after a night out, to smoke, chill or have sex to, or what have you. Some of these tunes were perfect for that. We thought that was amazing when we found out."

"It's based on the song Traitor from the first album, which all three of us worked on together. It samples Dr Who's Tardis at the start [laughs]. We also chopped up that sound to make a bassline, but I'm not sure how recognisable it is. It just had loads of stuff in there mashed into one. Then we let a guy called Holger Hiller loose on it and it became Holgertron.

"He was one of the characters signed to Mute. There were always people coming and going. He was a German avant-garde electronic music guy who sort of befriended us. The stuff he was doing was like electronic William S. Burroughs cut ups.

"He used to come in and see what we were up to. It was a completely different thing to his stuff. He kept saying that he wanted to do a mix for us, so we gave him this track."

"This was another outtake from Cocaine Sex, but with the drums going off [laughs]. The drum machine that I used a lot was the Korg DDD-1. It had a tiny little sampler in it, which used to really mash up the sounds. You could mess around with it, a little bit at a time, as you could only really put two samples in, like a kick and a snare. I really loved programming on it, though. You could trigger or sample into it. From a drummer's point of view, it was a machine I could really get to grips with.

"I never liked programming on the Roland stuff. It was all kind of push button, and not really as hands-on as I'd like. Even though the 808 sound was amazing, I never really enjoyed working with it as much as the DDD-1."

"I love this track. I've never stopped loving it. I always put it on mixtapes for people. It's just beautiful. It's got a movie theme sample that we built the track around. Then we merged other samples together, like Wagner and some hip-hop drums. It's a great example of Renegade Soundwave working together as a unit really well, and it shows. For me it's one of our best tracks, for sure.

"We were just getting to grips with the automation on the Amek desk at the Mute studio at the time. Before, we used to do all our mixes live. There would be three of us on the desk, pushing buttons. One
might be doing effects, bringing in echoes and delays. Then the other two would be bringing things in and out, trying to get it right so we could mess it up. That's how we did the first couple of singles."

"This is the real dubbed out one. It doesn't have reggae drums, though; it's got far more solid sounding ones than you'd normally hear. We mixed that with an electronic element to get something fresh. You've also got the sample from an old Studio One track. It all makes for a very uplifting track, and a very sensual one.

"The period of time when this record came out was when ecstasy was getting big. Black Eye Boy was one of those 'coming down' tracks that people would put on after a night out. This and Transworld Siren were much loved in that environment. It was the start of all that. People think of us influencing breaks and big beat, but we get a lot of love for the post-clubbing and downtempo stuff, you know? Using effects and messing with tripped out sounds. This was us experimenting with that."