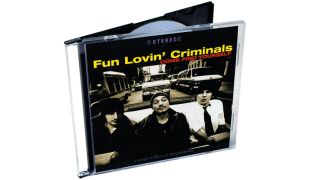 Come Find Yourself: A whole lot of Fun

Fun Lovin' Criminals' debut was released on 20th February 1996. It was packed with colourful tales of high-as-a-kite bank heists, shout outs to mob boss John Gotti, and samples jacked from everyone from Deep Purple to Meat Beat Manifesto. There would have been more samples, though, if the New York trio had been able to release the original demo of the album.

The six-track DAT tape that got front man, Huey Morgan, producer and multi-instrumentalist, Brian 'Fast' Leiser, and drummer, Steve 'O' Borgovini, signed to EMI was never going to see the light of day, however. Phil Collins, Cream, Gary Wright, Van Halen and The Doors had all been loaded up into Fast's Ensoniq EPS-16+ workstation for Huey to rap over, and there was no way the budget would ever cover clearing that lot.

"The label basically pissed themselves when they saw the list," says Fast. "Every song had five or six huge samples. It was retarded. They tried, but after six months they said, 'Go back in the studio and recreate them all yourself'. That sucked."

The weeded 12-hour sample session that first made the tape had to be painstakingly picked apart, with notes and riffs isolated, and replayed by the band. Help was at hand, however, in the shape of legendary engineer Tim Latham, who was brought in to coach the Crims through this tricky production problem.

"The pieces of the puzzle really came together after he got onboard," says Fast. "He'd worked with some cool bands, so knew the live element we wanted to add on, as well as with A Tribe Called Quest, so he knew his samples." After every last sample had been replayed, and after five days tracking all the live instruments at Steve Rosenthal's Magic Shop, they'd finally done it.

"The label guy comes down," says Fast. "Hates it. They had what I believe is called 'demo-itis'. They were so used to the demos… It was Tim that said, 'The charm and originality you heard is still there'. It's a good job that they listened to him or we wouldn't be talking about this album, some 20 years later."

"We sampled Gary Wright on the demo - remember that guy from Dream Weaver? He wanted to see the lyrics before he'd clear it. We knew he'd never go for it, so we just recreated it. Actually, this is the only time we replayed a sample and actually liked it. It took such a long time to recreate and it's such a minor part of the song. This track is so layered. Anyone that knows this song will think the guitar part [mimics the Country guitar lick riff] or chorus horn line is the main thing. The horn line is actually Reveille - you know, that classic military bugle call? We didn't have to worry about that sample because it's public domain."

"The groovy verse part is from a late 70s Buddy Miles record that we found on a sample record, which I thought at the time was by the Stereo MCs. The good thing about that era was that a lot of those recordings could be panned off to isolate stuff on the left or right side. That's what they must have done there. I learnt that from Jack Dangers from Meat Beat Manifesto. They were the bridge for me from going from industrial dance music to hip-hop. I met him at a truck stop on tour in England and we became friends and he taught me all these tricks and techniques."

The Grave And The Constant

"This was the second track we made in the first ever weeded 12-hour recording session we did that started the group. I don't remember where the Rhodes is from, but that bass is played. We had an Ensoniq EPS-16+, which had some bass sounds.

"The song is all about Huey getting arrested for selling coke when he was really young, in a stolen car, no less. He was told that he could either go to jail or go to the Persian Gulf with the marines. He was like, 'Yeah. What can be so bad about going to the Persian Gulf?' That changed his life, fucked him all up.

"Originally, this had a Phil Collins sample. His people heard it and were like, 'Err, no'."

"I wrote this. Huey heard it and was like, 'That's the fucking hit!' The label liked it too, totally because it had the Pulp Fiction sample ["Everybody be cool, this is a robbery!"] at the start.

"This was originally based around a two-second bit off Waiting for the Sun by The Doors. Listen to the start, that bassline [hums some bars] - that's that. We replayed it with a stand-up bass sound. We were going for that Cypress Hill sound, you know from classic tracks like Hits from the Bong and Insane in the Membrane, and stuff off their first record. We were trying to rip that off, and at the same time bring a bit more soul in.

"The formula we had was just looping beats off a Funkmaster Flex mix show I taped off the radio, pulling bits off Huey's CD collection, and then vigging basslines from The Doors."

"We used the huge Free Bird [by Lynyrd Skynyrd] sample here, which we eventually cleared, and a Deep Purple riff.

"At the end of Bombin' The L there's this little outro bit, this groovy thing. The bassline for that, I don't know why, but we ripped off the idea from the bridge section of Culture Club's Do You Really Want to Hurt Me? The middle bit of that track was next level to me.

"Then that guy going 'doo-da-da', that's from a CD that Huey had gotten off a Puerto Rican chick he was seeing at the time that was full of dope latin stuff. It had all this sick shit on it that we messed with."

I Can't Get With That

"This was a completely different song when it started. It had Steve Miller Band samples in, and was really slow. It all changed when we were opening for Korn. By that time we'd sped up King of New York and made it more of a Funk track. Their singer was going, 'La di da di, free John Gotti' for his whole show. At first we were pissed cos he was ripping us off, but it made us think, 'There might be something in this track after all'.

"Besides musicians, we were also influenced by crime boss John Gotti. New York in the late 80s, with cars blowing up, was kinda cool when you were young."

We Have All The Time In The World

"We had the album finished and the label was like, 'You gotta put a cover version on the record'. We did not want a fuckin' cover, but at the time, some label had just released a boxset of all the classic James Bond songs, and I loved the Louis Armstrong song, We Have All The Time In The World. Huey heard it, too, and was like, 'Ooh, it has a cool little trumpet line in, so let's do that'.

"This track is Huey having to sing. It's not the best vocal performance in the world but it makes sense, as that's how it was gonna sound live. You had no Auto-Tune then. There was the Eventide Harmonizer, but it was shit."

"Huey was sick that day. He came in and was like [gruff, gravelly drawl], 'I can't fuckin' record. Listen to my voice.' We were like, 'Ah, today is the day to do Bear Hug, then!'. He's like, 'Fuckin' A!'. When you listen to the track now, he sounds all ill.

"Bear Hug had a great Jimi Hendrix sample that we couldn't clear and didn't want to play, so there's a little bit right before the chorus where it drops back down to just the drum loop. That's where it would've gone."

"The original drummer in FLC, Steve 'O' Borgovini, co-wrote Come Find Yourself and Bear Hug. He was the drummer in my techno group, Moses On Acid, so I got him involved. All the original demos for this album were mixed to DAT tapes. Steve 'O' still has those. When he got canned from the band, he was like, 'Fuck you. You ain't never getting those DATs.' There's a treasure trove of stuff on those original demos."

"We originally vigged the bassline from Cream's Sunshine of Your Love. We had to replay it, which sucked. It took forever. By the time we finished rerecording all the things we had sampled at the start I had a stack of 200 disks. The original six songs we had on the demo only took up six disks. I brought all the disks into the studio and our engineer, Tim Latham, was there for us every step of the way saying, 'That ain't gonna cut it. Layer another bass sound over this.' He really gave us homework, which was cool, as it was Tim and not some shitty lawyer for some publishing company."

"This was basically a song that Huey wrote for the weird, drugged out band he was in before FLC, called Kingstone. They were like Chris Isaac meets Bad Brains. But we liked it because it was something different.

"I should touch a little bit on the lyrics. All the stories that Huey got for that album were from what we were seeing in New York at the time. He was an ex-marine, so he was pissed off at the system. And he was pissed off at a lot of politically charged subjects like racism on tracks like I Can't Get With That, too. He had a lot of stories to put into this album."