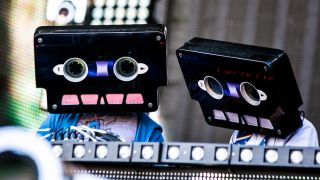 Cazzette's Sebastian Furrer and Alexander Björklund - or maybe it's the other way around - rock the house (Image credit: Jason Mongue)

"People are already using our sound," says Sebastian Furrer, one-half of the Swedish "dub-house" Cazzette. "I've already heard our approach on some other tracks out there. We like combining house grooves and the dubstep grooves, but we don't want to do the same thing all the time. We're trying to grow, and if other people are doing our thing, then we have to keep evolving."

Based on the bold beats, rich textures and striking melodies heard on Cazzette's debut album, Eject (released on Spotify), Furrer and his partner, Alexander Björklund, are off to a great start. Under the guidance of manager Ash Pournouri, they've been turning heads ever since the release of their highly successful remix of Avacii's Sweet Dreams.

Speaking of heads, what's with those giant cassette masks the duo wear on stage? MusicRadar sat down with Furrer to find out - and we talked a little music, too.

OK, so you're called Cazzette and you wear big cassettes on your heads. Who came up with that idea?

[Laughs] "That was Ash - he came up with it. It was really inspired by Daft Punk, of course. The cassette is pretty cool as a theme. It's not like our production is very big right now, but we hope to build it up in time. That's what's cool about Cazzette as a name - you can take it and build things around it. The heads are just the beginning.

"We don't wear them the whole time - just for 30 minutes out of an hour-long show. They get heavy, and they make it hard to breathe. You can get pretty dizzy after a while. Seeing can be a problem, too: I can't wear my glasses under the mask, so I'm blinded a little bit. But you know, it's part of the show."

How did you and Alex hook up?

"I started producing music about five years ago. I was concentrating on techno music - that's what I was really into. Then I found Alex on MySpace. He had some tracks that I thought were really cool and interesting. I contacted him and was like, 'Yeah, dude, you're awesome.' But he told me that the tracks weren't really representative of what he was doing now; they were a few years old. 'I'm making house music now,' he said.

"I wasn't listening to house - I was so into trance and stuff like that. A couple of years went by, and then I came back to him with a remix I did. He was really excited, going, 'Dude, you really improved your sound. Can we do some stuff?' After that, we started working together. I think we did 12 tracks in six months. We contacted Ash, and things started taking off."

Being that you and Alex were coming from different places musically, how did you merge your styles?

"Well, I think the dub-house thing was Ash's idea. Alex and I had already sent him some of our tracks, and they were more dubstep with a house element, so he thought we should combine dubstep with house beats. Nobody had been doing that back then. Then again, we like to mix up hip-hop with rock - anything, really. We don't have a specific sound, and that's what might make us unique. But I guess you could say that the basic framework is dub-house."

Did you two start performing live right away?

"No, not at all. The first time I DJ'd was when we toured the US with Avicii last summer. I think that might have been the fourth time for Alex. So we haven't spent a lot of time doing the live thing - we've mainly been producing. It's like we became DJs along the way, because you have to do live shows. You have to get out in front of people. You need to perform."

Has it been hard to make the transition from studio to the stage?

"A little. If you make tracks at home, it doesn't tell you the whole story - playing live does. And if you release a track before you play it out, maybe it's a bad track. Who knows? It's hard to tell without the crowd responding. It's good to see the energy of the people, what they like, what gets them excited, and then if you need to, you can take the track back to the studio and fix up and problems. So you play it out another time and another time, and then it's like, 'OK, it's perfect. Time to release it.'"

How did you and Alex go about combining your hardware and software?

"It wasn't too difficult, really. We use Sylenth 1, which is pretty common, and we like it a lot. It's pretty versatile, and we get so much out of it. Then we use the 3xOsc - you know, the oscillator - that's in Fruity Loops. In the FL Studio, they had the 3X as a basic synth. We tried it out, and pretty soon we found that we were using it a lot in our productions, because it's just so easy. It's got your basic sounds, but you can tweak them very easily. We love it.

"We got our first hardware synth two days ago, the Virus TI. We're pretty excited to see what we can do with that."

How did the songs on Eject take shape?

"Ash is kind of like the boss of the whole project. He just says, 'Do this, do that, do this kind of song.' Basically, he made us record a lot of songs! [Laughs] After a while, we had so many tracks that he said, 'OK, we're ready to put out an album.' There were a couple of bad mixes that we had to fix, but before you knew it, everything was there.

"We work separately - Alex works at his place, and I record in my hometown - and sometimes we go to Stockholm to work with Ash. Maybe 30 percent was done in Stockholm, and the rest was made on the road or at home. The intro track on the album, On The Road, is called that because we made it - "

The track Weapon is a real standout.

"Thanks. Ash found that song, because as you know, it's already out - it was done by Faustix originally. But Ash just loved the vocal and thought we could do something better with it. It didn't take long. The vocals were so beautiful, so that's a great place to start. The chords and the bass - it was all good. So we took a week and built our own track. For the guitar part, we used the guitar extension in Nexus."

Did you collaborate with anybody else on the album?

"We did, but it was only one guy - Jonas Torn. We did some bass tracks with him. He's an up-and-coming producer from Sweden, as well. I've known him from a while back. We chatted on Skype and Facebook. He's got a really style, very funky. Hopefully, we can do some more things with him."

What went into the decision to release the album in parts on Spotify?

"That was Ash, too. He met with one of the guys at Spotify, and they started talking about creating stuff together. The Spotify people thought it was interesting to work with us because they wanted to do something new. It all felt like a good combination. We think Spotify is great - we're big fans. It's always good to try something different that isn't the same old thing that everybody else is doing."

Talk to me about doing the Sweet Dreams remix.

"That was out first big test, in a way. Ash said, 'Do this remix, and if it turns out great, we can probably work together.' We had two days to finish it. I think we wanted to take it and make it harder. We wanted a drop that was our sound. It's not dubsteppy, but it's harsh. We wanted to bring it out and make it seem new. We made that big drop, and… yeah, it worked out."