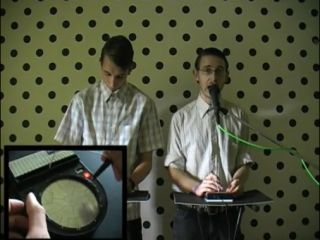 Steven Peavis and Brett Domino: like a geek Chic.

MusicRadar doesn't need much of an excuse to show you a new video from the peerless Brett Domino Trio, but when it features a new product as well, we feel pretty much compelled to send it your way.

The Trio's latest release (though we should point out that third member Mitch Hutchinson's absence is left unexplained, so it's actually a duo this time) is a hip-hop medley comprising performances of Rapper's Delight, Jump Around, and Boom! Shake The Room.

The whole thing is played on the Stylophone Beatbox (or two of them, to be precise), the new instrument from the makers of the standard Stylophone.

This has three sounds, and also boasts loop/playback and scratching functions. There's a headphone output, and an MP3 input so that you can play along to your favourite tunes.

Available for less than £20, the Stylophone Beatbox is now officially on our Christmas list (it looks like it'll be available in November). If you're still not convinced, take a look at this demo, too.