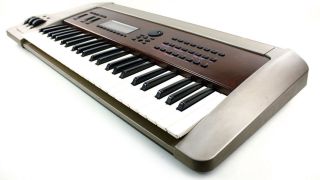 Looking back at the mid-'90s, it's obvious that musicians were ready for a change. The vast majority of synthesizers of the day made use of subtractive sample-playback synthesis to create and shape sounds. Once seen as an alternative to the simple waveforms produced by analogue synths, sample playback technology very quickly began to wear thin as manufacturers churned out an endless supply of what amounted to little more than preset players for the Holiday Inn set.

Yamaha, as it happened, had come late to the sample-playback game, instead clinging to its once-popular take on FM synthesis. Even so, by 1994 the company's backroom boffins had come up with an entirely new method of synthesis designed to challenge sample-based instruments. They called it "Virtual Acoustics" - another name for physical modelling.

Rather than sculpting a sound by chipping away at a waveform the way a subtractive synthesizer does, a modelled instrument creates its sounds with mathematical algorithms that simulate the behaviour of the various parts of an electric or acoustic instrument. For example, a bow (an exciter, or, as Yamaha called it, a "driver") scraping across a violin string excites that string (a resonator) into vibration. Additionally, the hollow body of the violin represents another resonator.

This was heady and potentially confusing stuff to musicians weened on a steady diet of square waves and resonant filters - but it hardly mattered, as Yamaha would keep much of this geek-speak hidden from the user in its swanky new proof-of-concept instrument. Instead, it packed the VL1 with prefab instrument definitions that represented many real (and unreal) instruments, and piled on loads of performance-orientated modifiers, each of which could be mapped to various MIDI controllers for real-time expression. Parameters like Breath Noise, Throat Formant, Absorption, Scream, and Tonguing could be controlled by the VL1's velocity- and pressure-sensitive keys, pedals and mod wheels, or any other MIDI CC.

The VL1 was capable of breathtakingly realistic emulations of woodwind, brass and stringed instruments - assuming you put in the time and effort to master it. Just as a real trumpet takes practice to play, so, too, does a modelled trumpet. And therein lies the rub: even as musicians decried the simplicity of sample-playback synthesis, they seemed equally unimpressed by the VL1's lack of hands-on immediacy.

And that's too bad. The VL1 was a truly exciting and innovative synthesizer, and though Yamaha tried its damnedest to make the technology fly with a series of successors, sample-playback synths continued to account for the bulk of the company's sales.

The musicians of the '90s were, indeed, ready for a change, but that change came in the form of renewed interest in the technology of the past, with virtual analogue synths offering the immediacy and instant gratification that a complex and demanding instrument like the VL1 could not. Physical modelling would - and still does - pop up in the occasional software synth, but it's never received the attention it deserves.

An underrated masterpiece of modern modelling, Tassman works as an instrument or an effect, relying heavily on AAS' physical modeling technology. It's sat dormant for over a decade, receiving little or no attention from its developers. It's still fun and inspiring, but desperately in need of an update.

NUSofting have taken the purist route with Modelonia - you won't find any analogue filters here! Instead, there are models of blown-brass and plucked-string behaviour that can be combined to create new and
unusual instruments. The unfamiliar controls might be off-putting at first, but it's worth making the effort to learn them.

One of the most interesting applications of physical modeling is the creation of entirely new musical instruments, and SpringSound is a perfect example of this. An iOS app, it can be used as an instrument or effects processor, and it also doubles as an editor for the Haken Continuum Controller.