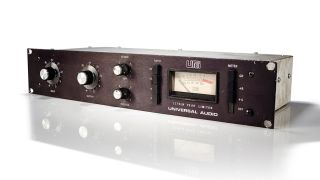 The Urei 1176N: Still going strong after almost 50 years in the business.

Bill Putnam - main man behind Urei, Universal Audio and Teletronix - was responsible for some of the best-loved studio equipment ever conceived. Having already invented the optical compressor by which all others would be measured, in 1966 he focused his attentions on designing a ground-breaking solid-state compressor. Released in 1967, his 1176 offered a then-cutting-edge transistor-based alternative to the popular tube-based compressors and limiters of the day. Like the tube-based 176 that preceded it, the 1176 offered no threshold control, but did feature something not normally seen on a limiter at the time: attack and release controls. As with Putnam's other famous limiter - the LA-2A - the 1176 was program dependent: its behaviour was affected by the signal running through it.

The silver-faced, blue-striped 'Rev A' was the first of many revisions, the most significant of which was the Rev C, with its black face and lowered noise floor, thanks to a redesign by Brad Plunkett (inventor of the wah pedal). Revs D and E are widely regarded to sound the best, though you'd be lucky to own any of the original Urei-badged variants.

Even the greenest modern engineer knows what to expect from a limiter or compressor - attack and release knobs, makeup gain, threshold control and a means by which to select the compression ratio. These are standard functions splayed across most dynamics processors old and new, and the 1176LN is no exception, featuring nearly all of them.

Yet an 1176 does things in its own special way. For instance, the aforementioned Attack and Release knobs function in the opposite manner to what you'd expect, with the fastest settings dialed in by cranking the knob fully clockwise. The compression ratio was selected by pressing one of four buttons - one each for 4;1, 8:1, 12:1 and 20:1. Unusually, you could simultaneously activate them all for the now-famous "all buttons in" or "British" mode - a trick that has since found favour on drum tracks for its super-steep compression slope and slightly distorted lows.

As impressive as all-buttons-in mode is, it's the speed of its attack that has solidified the compressor's place in many a modern rack. With a minimum attack of just 20 microseconds - that's 0.00002 seconds - it's just the thing for taming transients. An 1176 makes the perfect partner for a slower opto-compressor such as an LA-3A, the former knocking down wayward transients while the latter provides gentle compression.

Features like these and a gutsy sonic imprint have made the 1176 an industry standard. As such, it has been the subject of countless recreations, both hard and soft, not least being Universal Audio's own official re-issue of the real deal, as well as their virtual UAD plugin. The 1176 circuit is a favourite project among DIY-ers, whether they be handy with a soldering pencil or clever with a bit of code.

It is therefore likely that you already have an 1176 of some sort in your rack or plugins folder. If not, you'll have no trouble finding one, and as per usual, we've compiled a list of standouts to give you a start.

UA also offer virtual versions of the 1176 via the UAD powered-plugins platform. The 'Legacy' 1176SE and LN editions are included with UAD hardware (part of the Analog Classics bundle), and this collection of three UAD-2 plugins nets you models of the Bluestripe (A), Low Noise (LN) and 40th Anniversary (AE) compressors.

With ultra-fast (50 microseconds) attack and a carbon-copy of the "all buttons in" mode, these copies of both blue-stripe and blackface 1176 units offer an authentic recreation of two of the most popular revisions of the original Urei hardware units. You can also grab these '76s along with LA-2A and LA-3A emulations by way of a Waves bundle.

If you're in a pinch for cash and your DAW doesn't already include an 1176 copy, you could do worse than downloading Antress Modern's massive bundle of outboard emulations. Among them is Seventh Sign, a fast-attack compressor/limiter inspired by the famous Urei boxes. Mac users will have to look elsewhere, as this one is Windows-only.