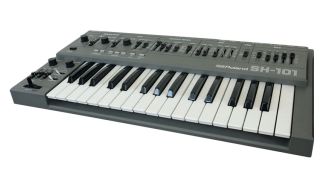 The year was 1982. New Wave was overplayed and the MTV era of neon and hairspray had officially begun. Synthesisers were hip if not huge, and a handful of forward-thinking manufacturers were cobbling together a new communication protocol called MIDI.

While most synth makers were desperately trying to bring the price of polyphony down to earth, Roland put out what could (and should) have become the de-facto electronic "axe" for the music video star. Sadly, Yamaha had other ideas, and the DX7 won that battle.

Nevertheless, Roland's SH-101 seemed tailor-made for the camera-conscious musician of the 80s. Decked out in red, grey or blue finery and optionally equipped with a handgrip and shoulder strap, the SH-101 could be battery- powered for maximum manoeuvrability.

Better still, the thing cost a mere £249 - almost unbelievably affordable compared to the luxurious digital instruments that had taken over the airwaves. In all honesty, it probably didn't matter what the 101 sounded like - at that price, it was destined to be snapped up by any wannabe new wave performer.

Fortunately, it sounded incredible, which was surprising given its meagre feature set. Sporting only a single oscillator bolstered by a sub-oscillator, one of the highlights was Roland's piercing yet smooth low-pass filter. Also notable, the user was not restricted to selecting a single oscillator waveform, as a mixer section enabled waveform amounts to be dialed in via sliders. A noise generator was also included.

Modulation was rudimentary but well-considered. A single ADSR envelope generator was shared by the filter and VCA, while the LFO offered a choice of sine, square, noise and random waveforms that could be used to modulate the VCA, filter, pitch and pulse width. Annoyingly, though, the LFO's rate slider also determined the speed of the onboard arpeggiator/sequencer.

LFO linkage aside, the sequencer was among the SH-101's best features. Simple step-entry programming of notes from the keyboard and the ability to transpose the sequence via the octave buttons or the keyboard itself made it a blast to play. It could even be clocked from external triggers. Very nice.

The sound of this diminutive dynamo was pure Roland, and when the 90s analogue synth revival kicked in, it became a staple fixture in the studios of countless dance producers. The basses were snappy and razor-sharp, the leads squelchy and expressive - especially if you dared to use that hand-grip with its built-in modulation controls.

Though affordable in its day, secondhand prices have, of course, gone through the roof. Thankfully, there are plenty of software options if you must have that sound - and it is very much a sound you should want, being warm, punchy and palpably 'analogue'. There's also its ease-of-use and logical parameter selection to consider, making it an ideal and rewarding instrument on which to learn synthesis from the ground up. It's very difficult to make it sound bad.

Some inexpensive synths were brilliant "for the price". The Roland SH-101 was brilliant, period. Never a rock star's instrument like the Minimoog or Prophet-5, the 101 was a synthesiser for the rest of us, and a damned fine one, too.

TAL has made a mission of knocking out exquisitely-crafted emulations of famous Roland synths, and TAL-BassLine-101 is its best yet. Featuring zero-feedback-delay filtering and a nearly spot-on recreation of the SH-101 interface, it adds a much more sophisticated sequencer, polyphony, velocity sensitivity, MIDI learn and more.

If you ever wanted more from your SH-101, then D16's LuSH-101 could be the synthesiser of your dreams. While the familiar interface of the original is indeed in place, it's surrounded by additional features like a second LFO, dual envelopes, layering, and even a high-pass filter. There's also a modulation matrix, layer mixer and effects.

If you're strapped for cash or don't need all of the features of the payware options, you could do a lot worse than to download the free TAL-BassLine. Not to be confused with its commercial sibling, this earlier offering provides a layout all but identical to the original SH-101. It's supremely easy to use and sounds great. Make it yours!