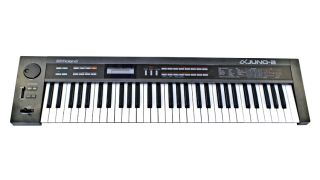 The Roland Alpha Juno originally sold for £575 when it was launched in 1985.

The story is all-too familiar: Roland release an instrument to lacklustre response only to see it become a sought-after classic years after the sell-by date has passed. It happened with the TR-808, the TB-303 and the subject of this Blast From the Past, the Alpha Juno.

Though the name suggests it shares a direct lineage with the Juno-6, -60 and -106, the Alpha Juno was a very different beast. Sure, it had six-voice polyphony and an analogue filter section, but the Alpha Juno derived its sound from a single digitally controlled oscillator capable of producing five particular sawtooth variants, three pulse waves (including modulatable pulse and saw widths), plus noise. A sub-oscillator was likewise over-endowed with six pulse waves at one or two octaves below the main oscillator. You could mix saw, pulse and sub-oscillator waves together for some impressively complex textures.

The Alpha Juno's LFO was less impressive - just a triangle waveshape - but the onset could be delayed, which was a nice touch in a budget synth. Roland more than made up for the LFO's shortcomings with a seven-stage envelope generator, shared between filter and VCA.

Speaking of filters, the Alpha offered a 24dB resonant low-pass model based on the same chip used in the more expensive JX-10 and MKS-70 - no self-oscillation, though. A simple high-pass filter was also available.

As was usual for a Roland synth, the Alpha Juno offered built-in chorus (prompting them to provide stereo outputs at the back). Portamento and chord memory were also included, along with Roland's weird horizontally mounted combination pitch/modulation wheel.

Costs were cut and the trend of the day maintained by omitting nearly all knobs and sliders in favour of a menu-driven interface, with parameters adjusted via a single, free-spinning 'alpha dial'. Users who wanted more could buy the add-on PG-300 controller for another 200 quid.

64 user patches and 64 presets were available, the latter ranging from the usual clavs and organs to some wickedly biting basses and gorgeous strings. As was common in its day, the Alpha Juno featured a smattering of goofy special effects patches, and it was one of these that would earn the instrument its place as a classic. Named 'What the', this burly, buzzing, seasick sound would come to be known as the 'Hoover', dominating European hardcore throughout the early 1990s.

The Alpha Juno 2 was not a successor to the Alpha Juno 1 - it was actually released at the same time, offering a full 61 keys compared to the Alpha Juno 1's 49. Moreover, the Juno 2's keys were velocity-sensitive (though all models responded to velocity data over MIDI). There was also a rack-mountable version in the shape of the MKS-50, not to mention less common speaker-endowed 'home keyboard' incarnations, the HS-10 Plus and HS-80.

The Alpha Junos have aged well - despite their membrane-switching front panels - yet they cost surprisingly little on the second-hand market. We don't expect that to remain the case forever, though, as musicians continue to recognise their musical worth.

Without a doubt one of the best emulations we've tried, ReDominator is available in AU, VST and Rack Extension formats for Windows and Mac OS X. It offers everything that made the original great, and can even load the presets from it. An outstanding recreation at a great price.

If you're jonesing for an Alpha Juno but don't have the bread to plump for any of the payware options, you could do worse than giving Phutura a look. It lacks the complex envelope of the original but offers eight-voice polyphony and a literally unbeatable price - it's free! Made with SynthEdit, so only for 32-bit Windows hosts.

Though not specifically designed to emulate any one synthesiser, u-he's dynamite DIVA counts some Alpha Juno-alike modules among its many interchangeable assets. You'll also get some awesome Moog and Korg emulations along the way. This amazing, no-compromises masterpiece can really put the hurt on your CPU, though.