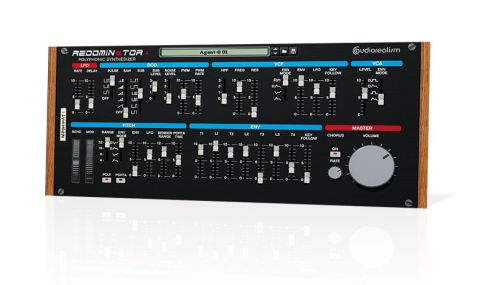 No doubt about it, among the many cheap and cheerful polysynth manufacturers of the 80s, Roland reigned supreme. It put out numerous instruments in that decade, many of them through its Juno line. Some, like the Juno-106, were massively popular at the time; others, like the Alpha Juno 1 and 2, would have to await rediscovery by techno and hardcore producers many years later. Indeed, the Alpha Juno, with its legendary "Hoover" sound (the actual patch going by the name "What the"), is what ReDominator aims to emulate.

ReDominator is a Rack Extension for Propellerhead's Reason DAW, available only through the Propellerhead Shop. It comes from Swedish developer AudioRealism, whose previous releases include excellent plugin emulations of Roland's TB-303, TR-808, -909 and -606, and MC-202. Like the original Alpha Juno, ReDominator provides a single oscillator voice with an associated sub-oscillator, but it's capable of some seriously complex sounds thanks to the 14 waveshapes on offer.

Better still, as with the original, the saw, pulse and sub waves are available simultaneously, including five sawtooth variations, three pulses and no fewer than six sub-oscillator shapes (all pulse-based). The ability to create waveforms that combine elements of all of them goes some way towards making up for the single-oscillator design. And even in the context of modern soft synths, some of the waves still qualify as unusual, particularly the many sawtooth variations. Pulse width modulation is provided, too, and the sub and noise generators feature positional switches for setting four possible levels.

Filtering is on hand in the shape of a splendidly squelchy resonant low-pass model preceded by a high-pass, and as well as the oscillators, external signals can also be routed through the filters in the Reason Rack. Although there's only a single envelope generator shared between pitch, filter and amp, it responds to velocity and is relatively complex, with Roland-style time and level parameters (four time sliders, three levels).

Being a Juno emulation, you'd expect an approximation of Roland's legendary chorus, and that's here, too, with just an on/off switch and a knob for setting the modulation rate. The LFO is similarly spartan, with controls for rate and delay time only; although independent amounts can be applied to the pitch and filter.

OK, so it isn't exactly overendowed - but neither was the instrument that inspired it. Like its predecessor, though, ReDominator is capable of a wide range of timbres, from typical SH-alike spiky basses to screeching, pitch-swooping leads.

The Alpha Junos were always good for rich synth strings, and so is ReDominator, with that classic chorus adding just the right amount of swirl. Sound effects are easy to dial in too, thanks in part to the noise generator and flexible LFO and envelope routing.

ReDominator takes us right back to the heady heyday of one of Roland's great synths. But don't mistake our whimsy for nostalgia - this is a powerful instrument in its own right. As with the original, it excels at "thin", biting timbres, simple ambiences, and, of course, those seasick Hoovers.

We compared it to the real thing, and while the timbre isn't identical, it's certainly one of the most convincing Alpha Juno emulations we've heard. That plus its ease of use and the price tag make it a no-brainer for Reason users. As for users of other DAWs, AudioRealism tell us that a VST/AU version is "highly likely sometime this year", which is music to our ears.