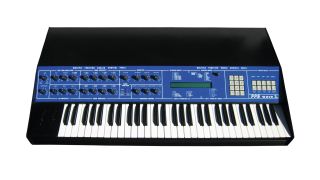 Analogue was still the name of the game when Wolfgang Palm, head honcho of PPG, unleashed the world's first digital, sample-based dynamic wavetable synthesiser - a technology that would forever change the music industry. We'll let Mr Palm tell his own story.

"I had the idea for a digital synthesis system around 1978," he begins, "when I had developed my own analogue monophonic synths and thought of improvements and polyphony. The first polyphonic synths like the big Oberheim Eight Voice had come up. These were basically eight monophonic analogue modules put together in a cabinet, so pitch instability was a problem.

"I thought about how one could make this simpler and more efficient. Before that I had already done the PPG 350 Computer Sequencer, so I had some experience with microprocessor technology, and I had used digital oscillators in my PPG 1020 synth from 1977 - they were very pitch stable. The idea came to put these things together and to develop a polyphonic instrument with digital oscillators, controlled by a microprocessor system.

"The idea of a wavetable system came up because I wanted not only to generate static sounds, like a sawtooth wave, but also sound sweeps, like a resonance sweep. It is best comparable to a movie film: on the film you have a lot of separate little pictures, and if you watch them in fast succession, you get the imagination of the moving picture. With wavetables it's the same: you have many single periods of sound, and when you play them one after the other, you get a dynamic sound that varies over time."

And thus was born the PPG Wave, the most famous of which, the 8-bit Wave 2.2 and later 12-bit Wave 2.3 combined PPG's dynamic wavetables with 24dB analogue filters, LFOs and envelopes to produce a perfect blend of digital grit and analogue warmth. Users could sweep through the selected wavetables with envelopes, LFO or keyboard pressure.

The sound was startlingly unique. Combined with the optional Waveterm computer terminals, PPG owners could create their own waveforms, wavetables and even perform rudimentary sampling tasks. They didn't come cheaply, but PPG Waves ended up in the hands of some big names, including Rush, Gary Numan, The Fixx and Depeche Mode.

Today, the PPG legacy is everywhere, though more often than not, today's wavetable synthesis is but a pale shadow of the dynamic technology from which it sprang. Many modern ROMplers simply play a static sample through a brace of filters and effects, all too often relying on the latter to disguise boring, unimaginative samples.

Still, there are a number of PPG emulations that come uncannily close to the real thing. It's Wolfgang Palm himself, though, who pushes and stretches the design the furthest, seeking not to emulate but to expand upon the original with his iOS WaveGenerator and WaveMapper apps.

Waldorf were among the first on the virtual instrument scene with the nearly spot-on PPG Wave 2.V, released through Steinberg way back at the turn of the millennium. The Wave 3.V came some ten years later and added more features, including user sampling - though strangely lacking other Waveterm- style functions. Still a winner, though!

Here's the plugin for PPG purists! This dead-on imitation not only looks and sounds like an actual PPG Wave, it even sports the same push-button programming. So close is it to the original that Wolfgang Palm was able to use it in lieu of an actual PPG Wave to create new wavetables and patches for existing PPG Wave owners. Very cool!

Not an emulation, but rather an extension of PPG technology, this iOS synth app was developed and released by Wolfgang Palm himself. As different from the usual virtual vintage redux as the original PPG was from the scads of analogue synths before it, WaveGenerator rewards a willingness to explore its one-of-a-kind sounds.