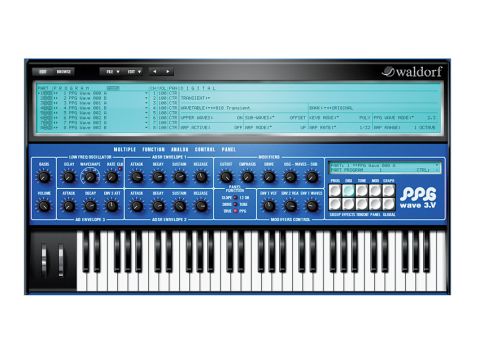 This emulation of a character-packed classic is now more convincing than ever, with greater flexibility to boot.

Waldorf's PPG Wave 2.V virtual synth is an emulation of the classic PPG wavetable synth. The hardware saw the light of day in the early '80s and experienced a number of revisions: 2 (the original), 2.2 and 2.3.

The soft version has been around for nearly a decade now and, though we've seen minor tweaks, fixes and even a repackaging, there has never been a significant update. We've seen variations on the wavetable approach (including Waldorf's own Largo), but the PPG clone seemed to be collecting dust.

That would have been a shame. Technology has come on a great deal since the PPG Wave 2.V was first released, and developers can now take advantage of a lot more horsepower to hone their emulations to a T and provide keen extras like built-in effects. Happily, that's just what Waldorf have done with the PPG Wave 3.V.

The interface will be instantly familiar to anyone who used the Wave 2.V or, indeed, a real PPG. As with the real thing, the interface is divided between familiar 'analogue' knobs and slightly more cryptic digital functions.

The analogue section recreates that of the hardware with only a few variations, while the top half is used as a detailed display of the deeper functions. It's a vast improvement over the hardware's archaic two-line LCD display.

A brace of buttons allows access to the digital facilities. The sound is as familiar as the GUI. Subtractive synthesis is the name of the game here, though instead of the usual smattering of simple waveforms, the PPG uses wavetables, each consisting of a series of digital waveforms strung together in a linear fashion.

This allows for a far greater range of sounds, but wavetables really come alive when using modulation to dynamically sweep through the waveforms, resulting in the shifting, evolving timbral changes that are the PPG's calling card.

New additions for the 3.V include a wicked Drive function in the filter section, along with the ability to select between the sound of the 2.2 and 2.3 hardware (or even the 2.V software, for backward compatibility). The True PPG mode must be activated to achieve the most faithful emulation of the original.

The filter itself features 12dB and 24dB modes. Waldorf has included a full complement of effects this time around. There's an EQ, phaser, overdrive, chorus, six-tap delay and, of course, a reverb. They all sound good.

The effects are assigned and saved per program, so if you stack a bunch of patches up in a multi, they can each have their own processing. Sweet.

Many of the sounds that we associate with the original PPG machines came courtesy of the bulky blue sidecar computers known as Waveterms. These heavy-duty processors opened up new possibilities for PPG owners, providing sampling, custom wavetables and more.

When we heard that the new PPG Wave 3.V was to include the sampling of the original, our anticipation-o-meter went off the scale. However, our excitement may have been a little premature.

Yes, the 3.V does import samples (dubbed 'transients' in PPG speak), and they are loaded in via the Digi page. The Wave 3.V comes with the original Waveterm factory samples, and it can even read Waveterm disc images (with the help of third-party freeware), if you are lucky enough to have an original Waveterm lying around.

8, 12 and 32-bit playback resolutions are provided, the first two being in keeping with the PPG Waves 2.2 and 2.3 respectively. As with the original, you can use up to eight different samples to create a multi (assuming that each of the eight parts is responding to the same MIDI channel).

You can adjust sample start and loop position, but not a lot else. It's very rudimentary by today's standard, but that's really the point: to provide an authentically retro experience.

Yet we can't help but feel a little disappointed that more of the Waveterm's functionality wasn't included. We'd dearly love to see the ability to cobble together custom wavetables (Waldorf suggests that this might be implemented in the future).

Still, the sampling is a nifty addition and it's terrific to have access to all of those familiar '80s sounds.

Waldorf's press releases have made much ado about the diligence applied to recreating the harsh, characterful sound of the original PPG Waves. It just so happened that we had access to an actual (battered) PPG Wave 2.2 for our review, and we couldn't think of a better way to put their claims to the test than by comparing the Wave 3.V with the gritty, grainy grandiosity of the real thing.

So how does the software stack up to the hardware? As the Wave draws upon digital wavetables, the oscillators are, as you'd expect, pretty close. The main differences that we found were in the envelopes, which isn't uncommon in emulations.

However, we have to say that in the case of the PPG Wave 3.V, the differences are slight indeed: they really only became evident when using ADSR 1 to sweep through the selected wavetable.

Obviously, there are some slight differences. It turns out that the envelopes in the Wave 3.V are matched to the slightly faster envelopes of the Wave 2.3, and even though you can switch between emulations of the 2.2 and 2.3 modes hardware, it seems the envelope is always in 2.3 mode. These disparities are even less noticeable when, say, shaping classic PPG bass.

You can plainly appreciate the hard work that Waldorf's boffins put in to the filter. It should be noted that the filter itself is the same as the one used in the 2.V - it has always sounded this good. The improvement comes in the way it responds to the envelope, which is far more accurate on the 3.V. Very well done, lads!

What's it bring to the table?

It's easy to expect too much from an update that took so long to arrive. While we'd have loved more Waveterm functions, there's no denying that the PPG Wave 3.V brings enough new features to justify the cost of upgrading.

The ability to layer programs with individual effects is alone worth the upgrade fee. It should also pique the interest of those who didn't grab the 2.V version.

It's still sensibly priced, it still sounds terrific and it's the closest thing to a real PPG. Of course, much of the cryptic nature of the 3.V's hardware forebear is still in place. The original patch names still give nothing away as to how they sound (superb, in most cases), and the Waveterm samples often have confusing names - all carried over from the real thing.

Nevertheless, like its old man, the PPG Wave 3.V provides an awesome, gritty sound that, even decades on, will make the most jaded synthesists sit up and listen.

Now listen to our audio demos to hear the Wave 3.V compared to our original PPG Wave hardware synth.

In each clip the real PPG can be heard first, followed by the virtual version:Bass