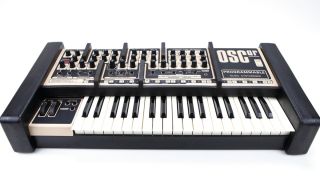 The list of classic vintage synthesisers reads like a Who's Who of American and Japanese instrument design, with only a smattering of entries from the UK; but there's no mistaking exactly which instruments were produced in this green and pleasant land: just look for the strange, quirky and characterful.

There are, of course, EMS' Synthi and VCS 3, looking for all the world like some alien flight deck; there's the diminutive EDP Wasp, its cheap plastic case and garish yellow keys belying a massive sound…
And then there's the OSCar. What is one to make of this monstrosity of design, with its blocky rubber endcheeks and maze of a front panel? Beautiful music, as it happens. Yes, Ultravox, Stevie Wonder, and The Legendary Pink Dots are just a few who held this synth dear.

Masterminded by Chris Huggett of Electronic Dream Plant (he's one of the designers of the aforementioned Wasp), the OSCar has become much sought after by lovers of all things analogue - a strange turn of fate, given that the synth was almost entirely digital.

Dual digitally controlled oscillators offer a choice of classic waveforms including saw, triangle, square and pulse varieties, accompanied by a single LFO and a pair of ADSR envelopes. There are two multimode 12dB filters that can be run in series for wicked 24dB filtering with dual resonant peaks. These filters are the only truly analogue components in the chain, and they account for much of the praise heaped upon the instrument.

And the winner is…

There's also a nifty arpeggiator and a sequencer onboard, and, as it happens, when using that sequencer, the OSCar can be made to act as a duophonic instrument with one voice played by the sequencer and
another available for keyboard accompaniment. Pretty cool.

The OSCar's digital DNA is betrayed by its most appealing feature: user waveforms. OSCar allows the user to create waveforms using a rudimentary form of additive synthesis, whereby the levels of 24 harmonics are adjusted using, of all things, the instrument's keyboard to select individual partials. While it may seem simplistic now, this provided the OSCar with some serious sonic firepower in its day. You simply couldn't get these sorts of sounds out of any other monosynth.

Unfortunately, as with many a synthesiser released in 1983, the OSCar just couldn't compete with Yamaha's DX7. Polyphony was already in and becoming affordable, and the DX7 made the OSCar's digital waveforms seem quaint at best; its signal path seemed positively old-fashioned. Yet the OSCar was reasonably priced, and that alone guaranteed that it would not go entirely unnoticed, though it never sold in any respectable numbers, remaining essentially a boutique item. It would be decades before the OSCar would be reexamined and reevaluated for the modern age. Fortunately, it would also be recreated for all to enjoy, but this time in virtual form - see below for more on that.

Truly a labour of love, impOSCar is a spot-on recreation of the original OSCar, boasting some nifty extras like polyphony, nine different filter types, multiple mono and poly unison modes, and the ability to route incoming audio into the signal path. Oh, and there's a staggering patch library, if you aren't inclined to roll your own.

Users of Native Instruments' mighty Reaktor can pluck this little beauty from among the many gems found in the Reaktor User Library. Though its creator claims it isn't a completely faithful recreation, it can certainly provide much of what was loved about the original. We especially like the random waveform generator. Good stuff.

Though not a direct emulation of the OSCar, Rhino can produce OSCar-like sounds thanks to its user-drawable additive oscillators and glorious multimode filters. Mind you, this massive semimodular powerhouse will do a lot more besides! You can get an exclusive free version with each and every issue of Computer Music magazine.