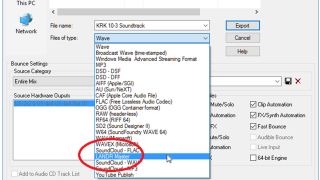 LANDR has landed in Sonar.

Once you've finished a track in your DAW, an obvious next step is to move on to the mastering stage. And if you're a Sonar user who wants a seamless way of automating this process, you'll be pleased to know that Cakewalk has just added an 'export to LANDR' option.

LANDR, of course, is the auto mastering service that's making quite a name for itself over the past 18 months or so. Now, when Sonar users call up their project export options, LANDR will be among them. If the LANDR app is already installed then the mastering process will begin automatically; if not, you'll be prompted to install the app.

"LANDR uses Machine Learning algorithms to generate a master customised for specific musical styles, and because the software is self-learning, the results become more refined as more people use the service. Sonar's seamless integration with LANDR also opens up a new workflow that allows simultaneous mixing and mastering, enabling creation of master-friendly mixes."

For his part, LANDR CEO Pascal Pilon said: "The goal with this partnership is not to replace manual mastering, but to complement it by providing engineers and producers with a new tool that allows them to hear instantly how their tracks will sound in a final state at any time during production. Ultimately, in addition to mastering final releases, Sonar users will now be able to use LANDR to reference their mixes early, often, and easily."

The LANDR support is included in the latest version of Sonar (Newburyport), which is available to all all current users of the software. Find out more on the Cakewalk website.