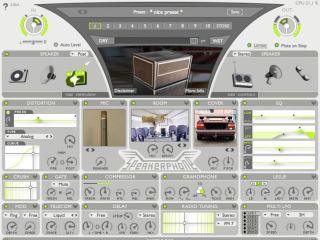 PRESS RELEASE: In the 17 months since Speakerphone's release it has quickly become a household name in audio post production and also in many music studios.

Speakerphone will give you all the walkie-talkies, distant transistor radios, upstairs TV sets, bullhorns, cell phones and guitar cabinets you'll ever need, plus five gigabytes of ambiences and sound FX to provide some context.

Added is a microphone simulation module that hosts microphones ranging from Royers to toy mics.

And also among the new modules in Speakerphone 2 is one that's called 'Coverup'. Coverup can place any sound inside tin cans, cardboard boxes, under blankets or in the closed trunk of a car.

Speakerphone 2 adds presets that switch via automation, an extensive LFO and envelope following section for controlling virtually all parameters of Speakerphone, and a Leslie speaker module.

The Speakerphone 2 upgrade costs $149/ €119, but free upgrades are available to anyone that purchased Speakerphone or the All In Bundle in 2009.