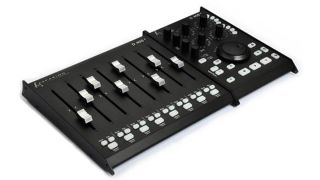 German manufacturer Asparion, probably better known for its app development, has taken a dip into the world of hardware with a new expandable DAW controller.

The D400 is a combination of two models, the D400T and D400F. The D400T forms the basis of the system and features the transport functions, while the D400F adds eight touch-sensitive faders.

It's possible to chain up to eight of the D400F module for 64 motorized faders - these aren't standalone, however, and will always rely on the D400T. Both units are designed to fit very neatly into your existing setup; at just 238m deep and 33mm high, they're pretty much the same as a MacBook Pro.

Setup for the D400 is configured via the Asparion Configurator software on Windows (this is not required for Mac and Linux systems) and the hardware operates over MIDI via USB. It's compatible with a whole host of DAWs including, Logic, Live, Cubase, Studio One, Reaper, Reason, Tracktion, ACID Pro and many more.