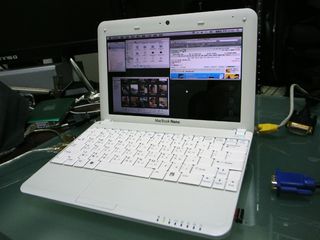 The fake MacBook nano runs OS X, but doesn't have a touchscreen.

An Apple netbook is possibly the most wanted item in the whole wide computing world, and if the latest rumour to fly round the internet is true, not only will this be released in 2009, but it'll also be touchscreen.

Digitimes quotes a Chinese-language Commercial Times report that says that a Taiwanese company called Wintek is set to supply the touchscreen panels for the machines, and that they will be assembled by Quanta Computers.

Before you start squirreling your cash, though, it's worth noting the major note of caution being struck by Engadget, which points out that these sources have given us some erroneous tips in the past. This being the case, an ultra-portable, touchscreen OS X machine should still be classed as nothing more than a possibility.

We're certainly happy to cling onto this possibility, though. If it is released, here's hoping it'll be powerful enough to run our music software.