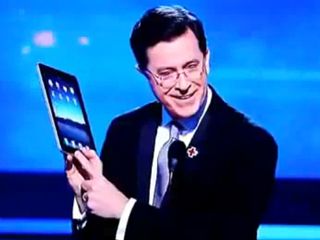 The 2010 Grammy Awards may have seen Beyonce winning six awards and witnessed a duet between Elton John and Lady Gaga, but for tech fans, the most notable happening was the appearance of Apple's iPad.

The device was pulled from the (presumably large) jacket pocket of US TV satirist Stephen Colbert as he was announcing the Song of the Year. He then proceeded to goad Jay-Z by asking: "did you not get one of these in your gift bag? Am I cooler than you?".

Audience amusement ensued… and we're guessing Apple was pretty pleased with the stunt, too.