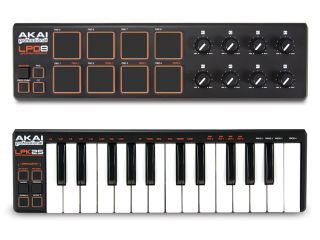 Akai has launched two miniature MIDI controllers in the shape of the LPK25 keyboard and the LPD8 pad controller. These will make their debut at this week's Summer NAMM show.

It probably isn't too unfair to suggest that these have been at least partly inspired by the success of Korg's nanoSeries devices, but there are some noteworthy differences.

For a start - and most importantly - the keys on the LPK25 are said to have a proper synth action, and they're velocity-sensitive. They're still mini- rather than full-sized, but this potentially makes them more playable than the laptop-style keys on Korg's nanoPad.

Other features on the LPK25 include an arpeggiator and sustain, octave up/down and tap tempo controls.

The LPD8 is said to be based on Akai's MPC range of grooveboxes and features eight blue light-up pads that are velocity-sensitive. It also comes with eight Q-Link knobs that can be assigned to parameters of your choosing.

Both controllers come with four memory banks that can be used to store settings for different software. Each device is less than 13 inches wide and weighs less than a pound.

Commenting on the launches, Akai Professional's Director of Business Development Adam Cohen said: "Today's music is in constant evolution, and that requires the tools for music creation to evolve similarly.

"The computer has entrenched itself as the new core of the music studio, and we are now seeing more live performance with computers than ever before. The LPD8 and LPK25 are the perfect extensions of the computer for making music in any setting."

Prices for the LPD8 and LPK25 haven't been confirmed, but they're expected to be released in the third quarter of 2009.