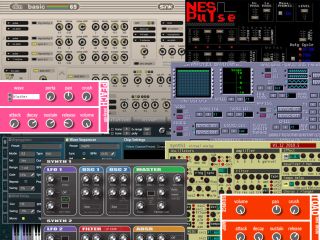 It's all about the bleep

Long after their ‘80s heyday, the kind of chirpy sounds that helped make Mario and his contemporaries famous have been adopted by electronic musicians across the board, and the influence of ‘chip’ sounds has become apparent in a huge range of genres.

Many of the home computers and video game consoles of yesteryear had audio circuitry and sound chips that could be programmed (and continue to be, by hardcore enthusiasts) to pump out lo-fi tunes from their distinct-sounding hardware. The results are now known as chip music, or chiptune.

The term ‘chiptune’ was actually coined later to describe Amiga tracker music that mimicked the older 8-bit machines; however, the terms are often used interchangeably nowadays. While chip music was low quality in the technical sense, it was rich in character.

The original 8-bit machines are still prized by chip purists for the pioneering, authentic and nostalgia-inducing sounds they provide, but the producer who fancies taking the traditional route to chiptune heaven may find it hard going. You’d be looking at hunting down a few antique pieces online or at car boot sales and then figuring out how to get sound out of the things (presuming that they’re in working order). Integrating them neatly into a modern DAW setup would be a whole ’nother problem.

Thankfully, computer musicians interested in the cheap and cheerful sound of chiptune can emulate their way to victory with far less effort and expense thanks to the ubiquity of plug-in emulations. Even better, many of these are freeware made by and for enthusiasts.

While sharing musical sensibilities with those who use the classic hardware in their tunes (such as Bit Shifter and Monodeer), so-called ‘fakebit’ producers have risen as a musical force to be reckoned with. Artists such as Big Giant Circles and _ensnare_ take the lo-fi sound and combine it with the forward-thinking and intuitive production tools available to today’s producer.

Although some purists would sneer at such ‘cheating’, this approach has kept the spirit of chiptune accessible and relevant in an age where the inconvenience of working with out-of-production machines might otherwise mean the gradual demise of chip sounds as compositional tools and instruments.

Click through to get a closer look at ten of the best plug-ins for any budding fakebit producer. For a complete guide to fakebit production, check out issue 180 of Computer Music magazine.

Based on the PSG processor found in the NES and Famicom, this killer instrument boasts 30 waveforms all engineered from classic sounds. Built-in envelope control and bitcrushing effects keep it nice and tweakable.

NESPulse emulates the pulse waves generated by the NES. It’s available free in a pack with its sister VSTs, NESTri and NESNoise, which emulate the console’s triangle waves and noise. Very functional additions to your chiptune toolbox.

In terms of chiptune plug-ins, chipsounds really is the mothership. It’s based around meticulously programmed DSP-based recreations of classic and obscure chips, with some sampled content to fill it out.

A careful emulation of the Atari YM2149. Each plug-in instance recreates just a single channel of that four-channel chip, so you’ll want to load up four to hear the full YM2149 effect.

A feature-rich three-oscillator synth that aims to capture the classic Commodore 64 sound. While its presets aren’t exactly functional, you can easily design some brilliant sounds by investing a little time.

Toad is a drum machine with a difference - it comprises classic chip sounds. Ranging from functional white-noise cymbals to recognisable -up sounds from classic games, this is great for using in conjunction with your own drums.

A freeware classic with zillions of presets available, this powerful, flexible synth sounds great and is super light on CPU. It’s ideal for basic chip sounds and so much more. An essential!

Liked this? Now read: The 27 best free VST plug-ins in the world today