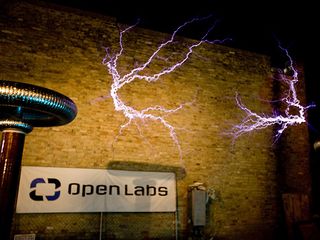 ArcAttack! are at the vanguard of the Tesla music scene.

Invented by Nikola Tesla in the late 19th century, the Tesla coil is made up of two or more coupled resonant electric circuits and is capable of generating extremely high voltage, low current, high frequency alternating current electricity.

That's as far as we're going to go with the technical stuff, because what you really need to know is that, over the past couple of years, enterprising (and brave) musicians have been using these lightning-like things to make music with.

Happily for us, they've also been posting videos of their Tesla performances on YouTube - here are six of our favourites.

Given the active Tesla coil's similarity to the electricity that shoots out of The Emperor's hands, this piece by genre pioneers ArcAttack! seems like its quintessential moment. As the soundtrack to a megalomaniacal empire's attempt to rule the galaxy, it's perfect.

We've heard some bizarre mash-ups in our time, but this one - a thumping concoction from ArcAttack! that features Justin Timberlake's distorted floor-filler being obliterated by the theme from Nintendo's Zelda - beats all-comers. We don't know whether to dance or run away and hide, frankly.

One might have thought that any Tesla coiling should be accompanied by a 'don't try this at home' warning, but Scopeboy seems to have filmed this clip in his living room. What the neighbours thought, we can only imagine.

It would be hard to describe a couple of 7-foot-tall Tesla coils as cute (this pair was built by Steve Ward and Jeff Larson), but after you've heard them spitting out this cheeky staccato rendition of the Mario Bros theme you'll almost want to take them home with you.

Jon Bon Jovi sang of carrying a "loaded six string" on his back, but in a duel with Scopeboy, we'd put our money on the soft-rocking balladeer coming off second best. "I use my Tesla coil as a guitar amp," he says, matter-of-factly. "250,000 volts of distortion".

Tesla coils don't have to be massive - here's a little baby one playing Beethoven's Für Elise. It's significantly less annoying than the mobile phone ringtone version that about a million people have.

14 more outrageous guitars from the internet

The 17 most outrageous drum kits on the internet