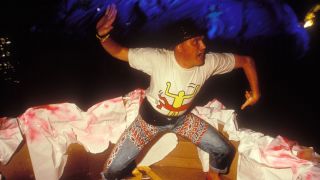 Since its inception at filthy warehouse raves and in debauched nightclubs, electronic dance music has gone from tabloid bogeyman to something your gran probably doesn't mind too much.

Sure, the older you get, the worse contemporary music sounds, but on the other hand, everyone knows that popularity is inversely proportional to quality. Call us a bunch of jaded old hacks (please - we like it), but we're pretty sure that dance music was objectively better back when no-one knew or cared it existed.

Some styles have fared better than others over the years, but many of the dance genres that were exciting and innovative back in the day have become tired or have lost what made them special in the first place. So then, here's MusicRadar's guide to the five EDM styles that used to be ballin', but now urgently need to be neutered.

House music was invented in the US in the early '80s and emerged sounding completely amazing. Its innovative electronic sound was the result of relatively affordable digital music production gear becoming available - thanks, silicon chip revolution - and the newly-democratised world of electronic music became the voice of the marginalised.

Combining the energy of disco, spirituality of gospel and raw funk of RnB, US house gave the world some incredible records, and when the UK caught wind of what was going on, it took the sound to exciting new places.

The great thing about house music in the '90s and '00s was that it was actually designed to make you want to dance. All is well until the late noughties, when everyone decides that indie is rubbish. As there is so much awesome house music being made, dance becomes the new king of pop, and it's at this point that things go wrong: the mainstream becomes interested in house. Specifically, the square-friendly, middle of the road European house music made by straight white dudes who talk at length about their clean-living lifestyles.

Now Deadmau5 makes records with Justin Bieber and your mum listens to Tropical House Bangaz on her way to pilates. Fair play to the normos for wanting to get involved, but can we have house music back now please - it feels like you've had it for ages?

If DJ Brockie was dead, he'd be rotating in his no-doubt bassbin-reinforced coffin at the current state of DnB.

Back in the mid-'90s, everything was looking rosy for the genre: normal people hated it, happy hardcore had split off into its own complementary genre that was similarly breakbeat-fuelled for a good year until this happened, and it was really pushing the boundaries of what electronic music could be. DnB raves were still a little edgy for mainstream audiences, but they attracted diverse crowds who were there for the music at least as much as the other stuff.

Everything was groovy until 1998, when Bad Company's The Nine was released. Now, we're not blaming the group's Fresh, dBridge, Maldini and Vegas personally for turning DnB into a massive sausage fest - they probably didn't realise quite what they were doing when they unleashed such a testosterone-addled tune into the world - but from that point onwards there was no going back. You didn't really see a lot of women or ageing white hipsters at DnB raves after that, but you did see a lot of gurning.

Fast forward to the present day and DnB is a broad, but rubbish, church. You've got a choice between very serious, noodly DnB for elitists, ultra-noisy jump-up for ravers, full-on chart-style cheese for the normos, and liquid for female ravers. It's a frankly bleak scenario for the more sober dance music beard-stroker, who has presumably moved on to techno...

Back in the day, there used to be such a thing as 'bangin' techno', but that dream is over son! Techno tunes with melodies? What is this, 1988?

Detroit, British and European techno all used to be completely different and totally bonkers, but these days the genre is all about being as boring as fudge, because who can concentrate on complex harmonic or rhythmic ideas when you're scheming to get into Berghain? In fact, don't sweat about knowing anything about the music - if you can pronounce Berghain correctly and have the right haircut, congratulations: you've made it into the techno elite!

Many techno DJs now seem more interested in exploring the inner recesses of their most intimate areas than creating a party vibe, and thanks to techno's now seemingly ubiquitous influence on the trendier styles of dance music, it looks like we're all destined to be dancing to minimal 808 toms for the foreseeable future.

It's hard to overestimate the cultural impact that hip-hop has had on our world. On its journey from '70s Bronx block parties to its current status as the globally-recognised sound of the underground it has had its fair share of virtuosic talents: Kool Herc, Run DMC, Eric B & Rakim, Dr. Dre, Jazzy Jeff, Pete Rock, J Dilla - the list really does go on and on.

Back in the day, mainstream hip-hop wasn't afraid to tackle thorny topics such as love, death, politics and religion - usually with a depth and clarity that rock struggled to rival - but current mainstream hip-hop has a much narrower lyrical scope that's split pretty evenly between the joys of conspicuous consumption, how to abuse prescription medication, and outright misogyny.

What's more, due to a variety of factors, most hip-hop beats are pure 808 and synth workouts as opposed to the more inventive and musically-involving sample choppage of the golden era. But hey: sample clearance is expensive and, at approximately 0p royalties per Spotify stream, hip-hop artists need to be a bit thriftier than their forebears.

Yeah, that's right: dubstep. And no, we're not just talking about Digital Mystikz and Burial either - surely you remember the heady days of 2009, when you listened to Sweet Shop on repeat and changed your middle name to 'Dubstep' on Facebook? Well, if not, that's probably for the best, because those 18 months when filthy dubstep ruled UK clubs were a beautiful nightmare.

Sadly, after dubstep took the 'most tearing bass music' crown from DnB it wasn't long before Skrillex and lots of wholesome young people who had never had a proper mental health issue or cried at 5am over their copy of Being With You arrived on the scene and transformed dubstep into stadium rock for the 21st century.

Now, let's take a few moments to remember that Nero existed, and how awesome they were before being written out of history when deep house arrived.