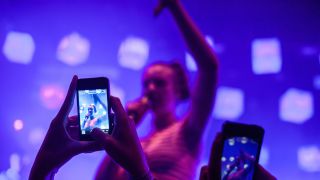 For many artists, they’re a scourge, but a recent survey suggests that a majority of young people don’t want mobile phones to be banned at gigs.

Ticketing outlet Skiddle quizzed 1,200 people aged between 16 and 30 on their attitudes towards phone use at gigs and festivals, and only 27% thought that it should be banned. Of these people, 37% said that they found phones distracting, and 34% said that they take something away from the experience. Just 8% believe that filming and photography is disrespectful to the artist or band, though, so it looks like those dodgy YouTube clips are here to stay.

Of the 74% who don’t think that phones should be banned, more than half of those surveyed said that they film shows so that they can relive the experience after the event, while almost a quarter like to share their footage on social media.

None of which is likely to please certain artists and bands, some of whom are now attempting to ban mobile phone use at their gigs. It was recently reported that US band A Perfect Circle ejected more than 60 people from a show in Pennsylvania for using phones during their set.